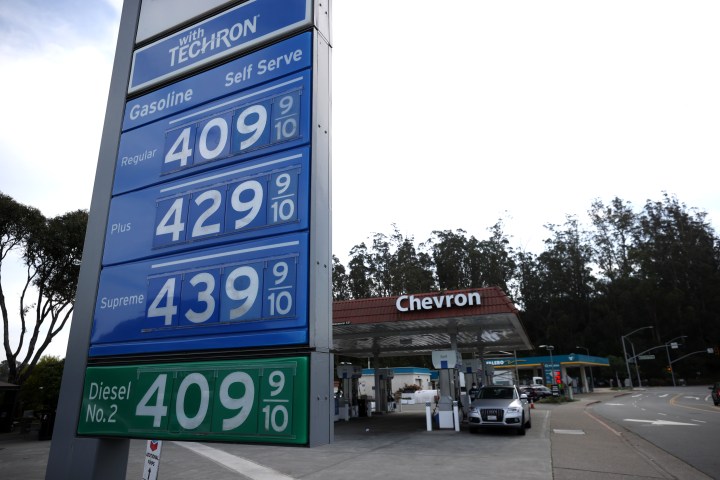 COPY
The price of crude oil has risen $3 to about $75 per barrel since Iran elected Ebrahim Raisi president last week. Justin Sullivan via Getty Images

The price of crude oil has risen $3 to about $75 per barrel since Iran elected Ebrahim Raisi president last week. Justin Sullivan via Getty Images
Listen Now

The price of a gallon of gas has jumped $1 from a year ago. The national average is now just over three bucks.

And if you’ve got long-delayed vacation plans, what should you pay attention to? Vaccinations, variants, the economic recovery — sure. But also, faraway Iran.

Iranians just elected an ultraconservative president who’s critical of the West, which could stall the return of much-needed Iranian crude oil to the world market.

Going into Iran’s election last week, talks between the government in Tehran and the Joe Biden administration were moving toward a deal to patch up their differences, revive the nuclear accord and let Iran export oil again.

Since Friday’s election, the price of crude has risen $3 to about $75 a barrel.

“Traders are having lower expectations for Iran oil,” Vakhshouri said.

Meanwhile, Russia and members of the Organization of the Petroleum Exporting Countries are keeping supplies tight as international demand is red-hot.

“Driving, flying and starting to go back to the office,” Page said. “That combination will lead to a pretty robust recovery in the United States and in Europe and in other markets of the world.”

“I think he’s very desperate for sanctions relief. I mean, these are very, very tough sanctions, after the U.S. withdrew from the [nuclear] agreement in 2018 under the Trump administration,” she said.

Whether Iran’s oil returns to the world — and when — is a “wild card” in energy markets, according to Tom Kloza at the Oil Price Information Service.

But as best he can tell, the price of crude will continue to rise, much like other commodities, including copper and grains.

“It’s looking more and more likely that the third quarter of this year is gonna see some spectacular appreciation in crude oil prices,” Kloza said.

He thinks that this fall, drivers could pay the highest gasoline prices in nine years.