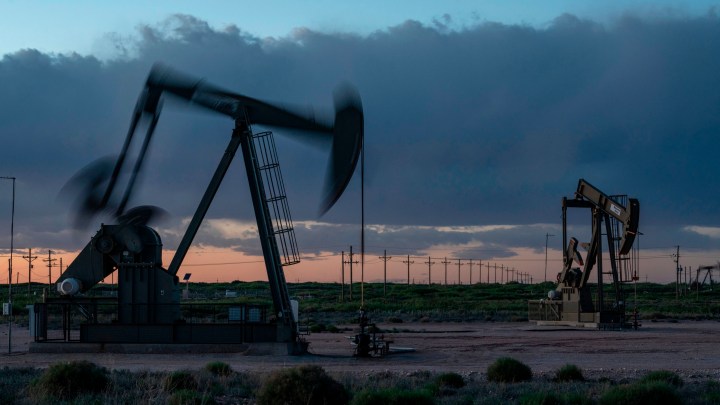 COPY
As the rally in oil prices continues, independent drillers are expanding their investments in Texas’ Permian Basin, but so far, industry giants are on the sidelines. Paul Ratje/AFP via Getty Images

As the rally in oil prices continues, independent drillers are expanding their investments in Texas’ Permian Basin, but so far, industry giants are on the sidelines. Paul Ratje/AFP via Getty Images
Listen Now

Last week, “Marketplace” covered the spike in natural gas prices. That was followed up with a story about high coal prices.

Now, we’re going to talk about a surge in the price of the other fossil fuel, namely oil. Both major price indexes, West Texas Intermediate and Brent crude, closed over $80 a barrel Monday for the first time since October 2014.

So how long are these high oil prices — and high gas prices — going to stick around?

Eighty dollars a barrel sounds high, sure. But $3.25 per gallon of gas at your local station … that’s definitely high. Politicians know that, and some of them are arguing that we need to get more U.S. producers to drill.

“Gasoline at the pump is driving that discussion,” said Eric Smith at the Tulane Energy Institute in New Orleans.

That price at the pump could be due to Hurricane Ida, which shut down a lot of production. The Joe Biden administration has asked OPEC to fill the gap. But Smith thinks that’s a bad play, given all the reserves in the U.S.

“It doesn’t make a lot of sense for any kind of long-term economic development in the United States to shut down our long suit voluntarily so that other countries can exploit it,” he said.

Historically, at $80 a barrel, energy companies would be rushing to drill. And we have seen rig counts inch up in Texas’ Permian Basin. But they don’t belong to the usual suspects, said Greg Priddy, an energy market consultant.

“It’s not Chevron or Exxon Mobil that are adding rigs and big numbers, it’s the small independent wildcatters,” Priddy said.

The bigger players are sitting it out to save money and protect investors’ dividends. So, the big question is, are they going to get in?

“There will be somebody out there who is willing to put money in,” said Ellen R. Wald, president of Transversal Consulting. “The question is just, at what point will we see that happen?”

It won’t be overnight, Wald said. Bringing new infrastructure on line is slow and expensive. But she doesn’t think prices are going to plateau at $80 a barrel.