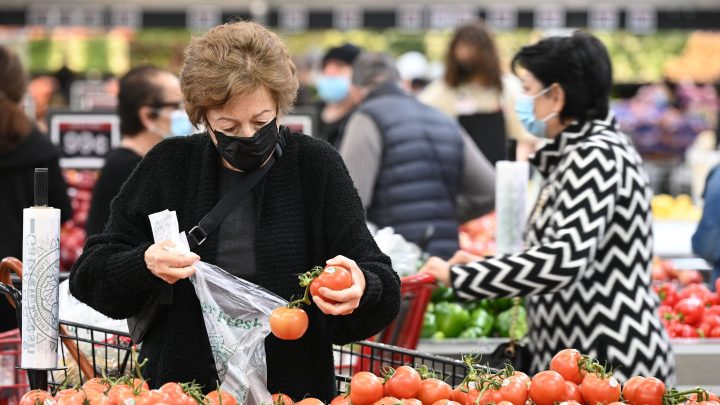 COPY
Food prices were up 7% year over year in January, according to the Bureau of Labor Statistics, but core inflation takes food and energy out of the equation. Robyn Beck/AFP via Getty Images

Food prices were up 7% year over year in January, according to the Bureau of Labor Statistics, but core inflation takes food and energy out of the equation. Robyn Beck/AFP via Getty Images
Listen Now

Thursday, the federal Bureau of Labor Statistics will release its February consumer price index. In January, the inflation measure showed prices were up 7.5% compared to a year earlier, marking the largest 12-month increase since 1982.

That number is known as headline inflation, but it’s not the only way economists measure and think about price increases. In addition to the broad headline number, there’s also core inflation, called the “all items less food and energy” index in the CPI. It was up 6% last month compared to a year earlier.

The Bureau of Labor Statistics has been measuring inflation without food and energy prices since 1957. Kevin Kliesen, a business economist and research officer at the Federal Reserve Bank of St. Louis, said core inflation gained more importance about a decade and a half later.

“Most economists agree it began during the early 1970s, during a time when there was a sharp increase in energy prices,” he said. The average price of a gallon of gas rose 46% from 1973 to 1974 during the first OPEC crisis, driving up headline inflation.

“Some economists got the bright idea, let’s just strip out those prices that are rising the fastest and the mostest and see what happens,” Kliesen said. “Voila, the core measure showed that inflation was much lower than headline inflation.”

Erica Groshen, a senior economics adviser at the Cornell School of Industrial and Labor Relations, was commissioner of the Bureau of Labor Statistics from 2013 to 2017.

“When I was at BLS, I would get a briefing the day before the inflation numbers came out where they walked me through everything that was in them,” Groshen said. “I remember one time when the price of limes shot up. It was getting to be $1.50, $2 per lime, and this had to do with a blight down in Mexico.”

Temporary weather events like that blight or a drought can have significant impacts on monthly food prices, just like geopolitics can influence energy prices. Core inflation, Groshen said, attempts to strip out the volatility of these two categories.

“If you’re looking at it from a monetary policy standpoint, core inflation is going to be what you want to be following,” she said.

In January, food and electricity prices, which are stripped out of the core, were two of the biggest contributors to the rise in headline inflation.

And food and energy are the kinds of costs consumers feel on a daily basis.

“If you ask people, ‘Is inflation going up or down?’ They’ll say, ‘Well, let’s see. It costs me more to fill up my gas tank, and it cost me a lot more the last time I went to the grocery store.’ So they would probably argue that inflation is going up,” said Kliesen, who prefers to look at headline instead of core inflation.