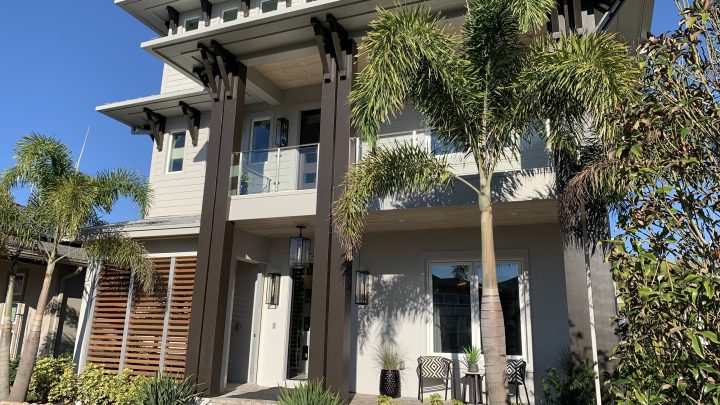 Walking into a 4,600-square-foot show home in the Lake Nona neighborhood of Orlando, Florida, sustainability wasn’t the first thing that leaped to mind.

“Obviously, I know that the wine room has grabbed your attention,” said a tour guide, pointing out a glass-paneled enclosure, stacked floor to ceiling with bottles.

Other guides were stationed throughout the sprawling house to rattle off its luxury features: The two-person programmable shower with 12 different nozzles, the tiled dog washing station in the garage, the poolside “cabana,” featuring one of the home’s two outdoor kitchens. Yes, two.

Yet for all its amenities, The New American Home 2022, unveiled by the National Association of Home Builders at its recent International Builders’ Show, is also what’s known as a “net-zero energy” home, meaning it has the potential to generate at least as much energy from renewable sources as it uses.

From the second outdoor kitchen on the roof deck, visitors could see several large solar panels gleaming in the Florida sunshine, providing enough power, another guide told us, to more than offset the home’s energy use.

Net-zero energy homes are catching on in the homebuilding industry, said Matthew Black, project coordinator for the Advancing Net Zero program at the World Green Building Council. The group’s goal is to decarbonize the building industry by 2050. Getting there, Black said, will require a big reduction in residential energy use, which contributes a whopping 20% of carbon emissions in the United States.

“Energy efficiency is a really important part of this,” Black said. “If we don’t build a home to be efficient, then it’s still going to be consuming an awful lot of energy, and we’re going to have to build more and more capacity to meet that demand.”

But Black said the industry also needs to think more about what he called “embodied” carbon emissions — those created in the manufacturing, transportation and construction phases of building, which he said make up around 11% of global emissions.

“The outdoor kitchens, the swimming pool and even the overall size of the building — all of those choices have emissions associated with them,” Black said.

When you consider all that, it’s hard to say how “green” The New American Home really is.

The house is projected to be awarded LEED platinum status, the highest level of a rating system that evaluates homes for energy and water efficiency, air quality and waste reduction, said Josh Kane, vice president of Two Trails, the sustainability consultant on the project. Other third-party certifications include the National Green Building Standard emerald level, as well as the Environmental Protection Agency’s Energy Star rating for energy-efficient homes.

If the house is a bit over the top, Kane said, that’s intentional. The hope is that builders and designers who tour the home will leave inspired.

“It showcased what luxury can be and that you can still have a luxury house and have it still be sustainable and energy efficient,” he said. “The idea here is that we’re moving the industry forward, one house at a time.”

Building enough zero-energy homes to make a real difference will take a massive investment. It can add 10% to 20% to the cost of building, Kane said — though a lot of that is recouped over time in savings on utility bills.

Ron Nance, with The Oaks Development Co. in Lawton, Oklahoma, took note of the sale price as he toured the home, which had just sold for $2.7 million. While Nance has been building more energy-efficient homes, he said he’s not sure that net-zero would pay off for him back home, especially at a time when affordability is a big challenge for many homebuyers.

“I want to leave the smallest environmental footprint that I can whenever I leave this Earth,” he said. “But in reality, people like that, but a lot of times they’re not willing to pay additional for that. They would rather have a little bit bigger house or a little bit smaller mortgage payment.”