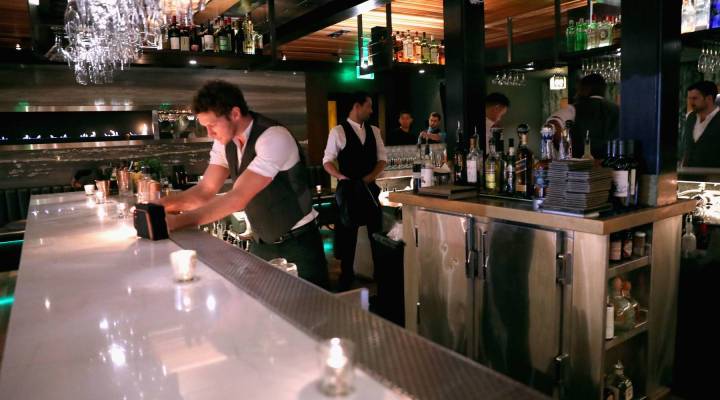 Some restaurants are really loud, and that’s intentional.

Kate Wagner, an architecture and design critic based in Baltimore also known for hating McMansions, wrote an article for The Atlantic exploring why restaurants have become so loud. One reason: Since the ’80s, minimalist design trends and the popularity of attached bars and open kitchens have been on the rise. Those design elements essentially create “mirrors” for sound waves, which reflect off their surfaces. In a conversation with Marketplace host Kai Ryssdal, she shares evidence that these elements can increase a restaurant’s profitability (listen by clicking on the audio player above.) Wagner also revealed her technique for measuring sound in restaurants using the decibel scale. But how do these numbers correspond to sounds that you’re used to hearing? Here’s a list of common examples.

100 decibels: Fairly high level of sound intensity. Listening to this for eight hours or more without adequate protection will definitely hurt your hearing. Examples in this range: an airplane takeoff, a tractor and a jackhammer.

90 decibels: Above the threshold where prolonged exposure — eight hours or more — will damage your hearing. Some common examples near this range: a plane nearing its landing strip, shouting and a lawnmower.

85 decibels: This is roughly the level at which we might see hearing loss if people are exposed to it for a long time — eight hours or more. Some examples around this level: a diesel truck passing you on the road or a snowblower. Wagner said that many restaurants she visited with open kitchens and bars had sound intensities at the this level or higher. This means that servers and kitchen workers in loud restaurants are especially vulnerable to hearing damage.

80 decibels: Loud, maybe annoying, but not quite in the range where hearing damage is likely. Some examples include a food blender, a washing machine and an alarm clock.

70 decibels: Pretty safely beneath the zone where hearing damage is possible, but some people may still find these noises loud enough to be irritating. Some examples: a dishwasher, a running shower and a vacuum cleaner. In her Atlantic piece, Wagner describes the noise level at the coffee shop where she’s writing as 73 decibels.