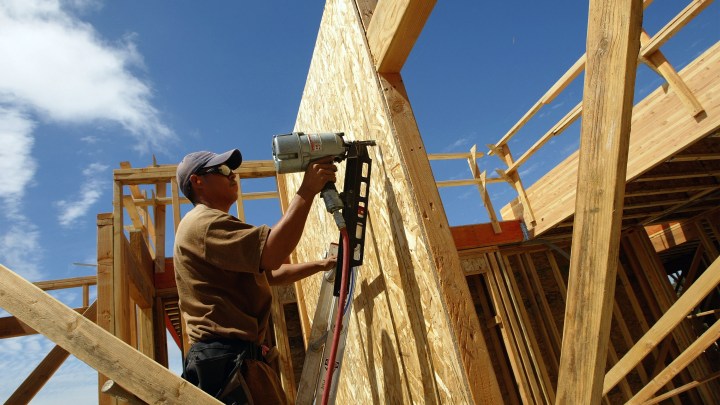 New numbers from the Census Bureau show residential construction picked up almost 17% in December from the month before. With the usual caveat that the monthly numbers are subject to revision, 2019 was a better year for builders overall.

The bottom line is we’re still not building nearly enough housing to keep up with demand. That’s likely to be a big topic of conversation next week at the International Builders Show in Vegas. But the industry will also turn its attention to what houses of the future might look like.

Every year the National Association of Home Builders unveils its New American Home. This year’s model in Henderson, Nevada, is a 7,000-square-foot house with curved walls and stunning views of the Las Vegas Valley.

The house includes high-tech appliances, sliding doors and screens that can open and close at the touch of a button. The price tag comes in at $5.7 million.

Allison Arieff, the editorial director for urban planning think tank SPUR, wrote a piece in the New York Times last year arguing that the New American Home should really be a condo. With the climate and affordability crises, she said, we can no longer afford the American Dream of detached single-family houses with two-car garages.

“When you set the tone that we should all be aspiring to the largest, most grandiose house possible, I think you’re really out of tune with the current realities of where we are,” Arieff said.

The Nevada house is solar powered, with drought-resistant landscaping. Builders say it’s designed to be aspirational, and that many of the innovations will eventually trickle down to the lower end of the market.

“Until the American consumer tells us that the aspirational home is a condo, we’re going to keep developing and building what the consumers want,” Howard said.

But for millions of Americans, owning any house at all is “aspirational” these days.