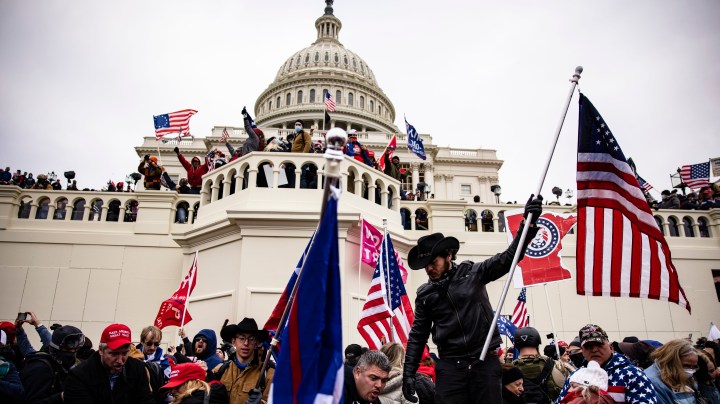 On Thursday, the anniversary of the Jan. 6 insurrection at the U.S. Capitol, President Joe Biden made remarks condemning the attack, former President Donald Trump and his allies. He didn’t mince words.

“You can’t love your country only when you win,” Biden said. Trump and his associates held “a dagger at the throat of America,” he added.

Though it may feel like ages ago, last January, millions were glued to their phones and television screens as a violent mob attacked the U.S. Capitol in an attempt to interfere with the certification of the 2020 presidential election.

A noose was hung from a gallows outside the Capitol. The nation’s elected officials were forced to shelter in their offices as Trump supporters, invested in the “big lie” that election interference was the reason for Joe Biden’s presidential victory, stormed the Capitol.

Once the insurrection was quelled, lawmakers returned to certify the election, though nearly 150 voted not to.

The day after the deadly insurrection, the markets were … remarkably fine. But corporate America was shaken, no doubt, and many companies were quick to make statements and promises about shifting their political contributions.

How did companies respond in the days after the insurrection?

“You saw a fairly, you know, robust, public disassociation with the folks who had voted against the certification of the results of the election,” said Daniel Weiner, director of elections and government at the Brennan Center for Justice.

Dozens of major corporations pledged to cut political contributions to Republican objectors or to political action committees that supported the congressional members who voted to overturn a free and fair election.

Who were the objectors?

The list includes 147 names — eight senators and 139 representatives, all of whom were Republican.

Political donations through PACs are slowly picking up a year out from the insurrection. According to The Conference Board, however, nearly 1 in 4 corporations have not resumed PAC contributions whatsoever.

Some corporations, like Cigna and Eli Lilly, went back on their promises and directly donated thousands to Republican objectors, according to the newsletter Popular Information.

Can you put it into context a little more?

You’ll see a lot of outlets reporting on how corporations have largely reneged their no-contribution promises.

And there are other avenues for corporations to donate to politicians that might attract less attention. “Super PACs and dark money groups may seem more attractive,” Weiner said.

But a lot of corporations have kept their promises. Corporate PAC donations to the 147 Republican objectors dropped by some 60% between 2019 and 2021, according to Popular Information. Many of those Republicans raised more in total in 2019 than in 2021, as they were unable to recoup the money that corporate PACs provided.

That’s not entirely true for all objectors though. A few key outliers, including Hawley, Cruz and Taylor Greene, saw a boom in individual donations after they voted to overturn the election.

What will the future hold?

If the past year has taught us anything, it’s anyone’s guess. In terms of corporate PAC giving, the future is also pretty muddled.

Popular Information reached out to 183 companies, asking whether their corporate PACs would stop donations to Republican objectors in 2022. Only seven — including American Express, Dow Chemical Co., BASF, Lyft, Airbnb, Eversource Energy and Microsoft — explicitly said they would.

A lot of this boils down to: What price tag do corporations put on democracy?

“In some sense, I’m not totally persuaded that it’s on corporate America to use campaign-finance giving as a way to safeguard our democracy,” the Brennan Center’s Weiner said.

He said elected officials and the public hold that responsibility. Still, it’d be in corporations’ best interests to ensure a healthy, successful democracy. After all, their bottom lines depend on it.

“Our entire economy does depend on a democracy in which all Americans can rely and can, you know, reasonably feel invested,” Weiner said. “I do think that, at least for a moment, many [corporations] perceived the insurrection and the effort to overturn the results of the 2020 presidential election as deeply threatening the stability in our economy. And that was what was motivating.”