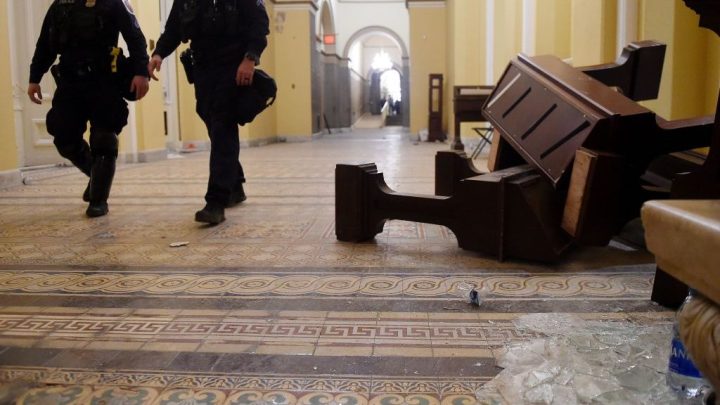 COPY
A small sign of the damage inside the U.S. Capitol. The mob assault Wednesday did not seem to disturb investors. Olivier Douliery/AFP via Getty Images

A small sign of the damage inside the U.S. Capitol. The mob assault Wednesday did not seem to disturb investors. Olivier Douliery/AFP via Getty Images
Listen Now

In the wake of a deadly insurrection on Capitol Hill, the major U.S. stock indices saw record highs. Gary Hoover, an economist at Tulane University, wasn’t surprised. For the markets, this was only a short-term problem.

“The markets are saying, ‘OK, this is the last hurrah,’ as violent as it was,” Hoover said. “But with the ratification for President-elect Biden, they see more stable times in the future.”

Andrea Eisfeldt, an economist at the Anderson School of Management at the University of California, Los Angeles, also expected this reaction, or lack thereof.

“Many bad pieces of news have come out over the last year or so that have just not been able to put a dent in the valuations of the companies that are driving these indices,” Eisfeldt said.

The pandemic-induced recession, legislative stalemate, protests over the death of George Floyd — for Eisfeldt, this was just the latest in a series of things that didn’t bother the markets. Instead, Eisfeldt said, market participants were eyeing the Federal Reserve and its long-term stance on its benchmark interest rate.

“We are going to see government support,” said Eisfeldt, “probably in the form of low rates, for quite some time.”

But another key factor is that the people who participate in the markets are among the people least affected by the recession.

What do changes in the stock market actually mean?