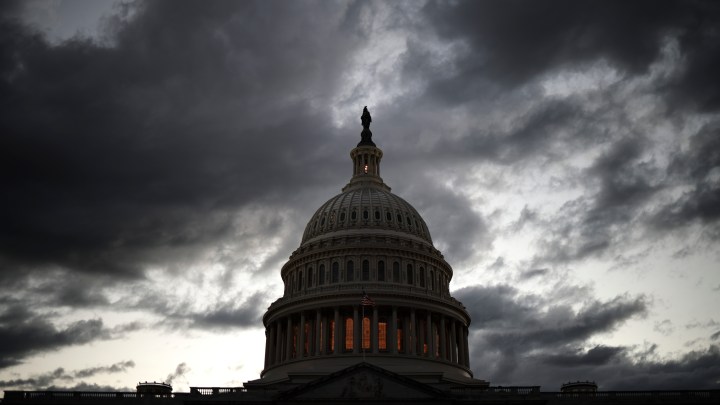 COPY
Pay and hours are at the core of the unionization efforts. Anna Moneymaker via Getty Images

Pay and hours are at the core of the unionization efforts. Anna Moneymaker via Getty Images
Listen Now

As lawmakers on Capitol Hill make their ways through the infrastructure bill and the $3.5 trillion spending bill, two potential scenarios are haunting the negotiations.

One is that the federal government runs up to a funding deadline and we have a partial government shutdown, which we’ve had before. But the other is that we blow past the debt limit … and there’s not really the same kind of playbook for that.

Right now, the government’s income isn’t enough to cover its expenses, so it keeps borrowing to cover the difference. But hitting the debt limit is like hitting the limit on a credit card — the government won’t be able to borrow any more.

It would have to choose between paying its bills and paying back the money it’s already borrowed.

“There’s really no way that you could stave off all of the consequences from the federal government starting to miss payments, mostly because they’re located in the financial markets,” said Shai Akabas, an economist at the Bipartisan Policy Center.

That makes it hard to predict what will happen. For example, the government could make a choice to try to stabilize markets by emphasizing paying down debt.

But “bondholders are going to realize this is not politically tenable to, you know, keep paying principal and interest before Social Security recipients, military and veterans, and everyone else in the country,” said Bernard Yaros, an economist at Moody’s Analytics.

Those at the Federal Reserve and Treasury Department probably are scrambling to prepare what-if scenarios, according to Harvard law professor Howell Jackson — like prioritizing debt or paying everyone really slowly.

“But I should emphasize that we really don’t know how it would work and whether they should do it,” Jackson said. “And I think it’s important for everyone to recognize that this is very dangerous territory.”

It would be much better for Congress to avoid it altogether, he said.