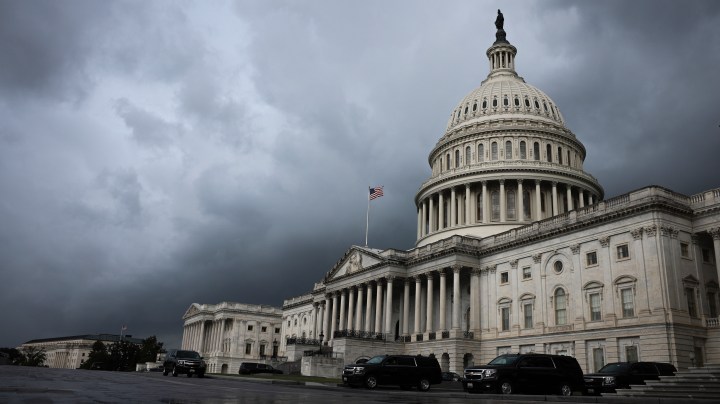 Update: Sep. 28, 2021: On Tuesday, Treasury Secretary Janet Yellen told lawmakers in Congress that the U.S. government would run out of cash to pay its obligations by Oct. 18. Yellen told Congress in a letter that “it is uncertain whether we could continue to meet all the nation’s commitments after that date.”

If your eyes glazed over reading that, not to fear. Marketplace asked experts to break down what the debt ceiling is and why it does, in fact, matter to you.

So, what is the debt ceiling?

The debt ceiling, or debt limit, is simply the amount of money that the government is allowed to borrow, which the government uses to meet existing obligations — think things like military salaries, Social Security benefits, tax refunds or payments on national debts.

When the U.S. Treasury reaches the debt limit, then it has to start leveraging “extraordinary measures” to conserve money. Such measures can include suspending sales of securities and pausing investments or reinvestments in some funds.

“You could argue that the debt limit is a really misnamed piece of legislation because it is not a credit limit. It doesn’t control our debt, it controls paying the bills,” said Susan Irving, a senior adviser at the Government Accountability Office. “What creates that debt is a combination of law and the economy.”

On Sep. 21, the House of Representatives passed a bill along Democrat party lines that would extend existing spending levels through early December and suspend the debt ceiling through 2022.

The bill, which also included disaster aid and funding for Afghan refugees, was blocked by Republicans. Now, to avoid a full-blown government shutdown, Democrats will have to scramble. An important note, however, is failure to raise or suspend the debt limit would not lead to a government shutdown. Shutdowns are caused by failures to fund the government.

What happens if we don’t raise the debt ceiling?

Defaulting on debts would be the name of the game. And the U.S. Treasury is inching closer to exhausting its “extraordinary measures,” meaning Congress has until the Oct. 18 deadline outlined by Yellen to raise or suspend the debt ceiling before the unthinkable becomes reality.

And if the U.S. defaulted on its debt, then what?

The four horsemen appear? Fire rains down? OK, it wouldn’t exactly be the end of the world. But it would hurt a lot of people financially.

The U.S. has never defaulted on its debt — at least not intentionally. There have been times where the government has waited until the last minute to raise or suspend its debt limit, then technical glitches caused bills to be paid late. Even those momentary blips required some time for full economic recovery, Irving said.

To default, however, would be “seriously damaging,” Irving said. The U.S. Treasury website prefers the term “catastrophic,” saying that if the U.S. did in fact default on its obligations, it would precipitate a financial crisis.

“In concrete terms, you could see the price or the valuation of U.S. Treasury debt going down, which is the same as saying interest rates are going to rise for U.S. government borrowing. What that’s going to do is it’s going to tend to blow up our deficit faster than it otherwise would,” said Menzie Chinn, a professor of public affairs and economics at the University of Wisconsin – Madison.

Its impact on everyday life would be felt immediately, Chinn said. For example, if the government is unable to pay its bills, that would mean it would be unable to make payments to those who work in the military, federal government workers or those who depend on Social Security. Food assistance benefits could be stopped for millions of Americans, too.

The phrase “financial armageddon” has been thrown around in this worst-case scenario. One recent study found that unemployment in the U.S. could skyrocket to nearly 9% (from the existing rate of 5.2%) with 6 million jobs potentially on the chopping block. In terms of household wealth, $15 trillion could be wiped out.

U.S. Treasury debt is also held by institutions around the world, meaning a default would have damaging international repercussions. The security of Treasury debt, typically seen as one of the safest assets in the world, would be called into question, Chinn said. A general sense of distrust could be tied to investments in anything American, so foreign investments in American companies could dip, too, as stocks tumble.

Why do we do it this way?

For the debt limit, we can thank the good ol’ U.S. Constitution, which gives Congress control of the purse.

Prior to 1917, Congress would approve every issuance of new bonds by the U.S. Treasury. Then, when attention shifted to the war effort during World War I, Congress did away with the old system of approval, instead opting to allow the Treasury to accrue debt and issue bonds as long as it fell under a certain amount — that is, the debt limit.

Another reason this system is in place? Appearances matter, Chinn said.

“I think it’s bad theater to say, ‘Hey, I want to have the ability to spend unlimited amounts.’ That doesn’t sound good to the general public. So there’s almost this false sense of fiscal discipline, saying, ‘Well, there’s this debt ceiling that we’ve got,’” he said.

Do other countries have something similar to a debt ceiling?

Call it the economic apple pie, the debt ceiling is pretty uniquely American.

“There is only one other developed country in the world with a nominal dollar debt limit. It is Denmark, and it’s set so high as to not be controlling,” Irving said. “There are countries that use debt as a control in advance, you know, debt breaks or things like that.”

So what is the magic number of the debt ceiling?

According to Irving, there’s no magic number or formula. “All we know is that you cannot forever go on having debt growing faster than the economy that supports it,” she said.

The current statutory debt limit sits at $28.5 trillion, per the Congressional Budget Office.

How many times has the debt ceiling been raised or suspended?

Many times. According to the Treasury’s website, “Congress has acted 78 separate times to permanently raise, temporarily extend, or revise the definition of the debt limit” since 1960.

Why did the debt ceiling become so politicized?

Well … because it could be, Chinn said.

He added that, really, the debt limit is an odd thing to have in place. The Government Accountability Office has proposed several alternative ideas to rechoreographing the debt ceiling dance that would better couple debt ceiling decisions with decisions on revenue and spending — when those initial decisions are made.

But, there may not be political interests in getting rid of the debt ceiling debates, Chinn said, despite its very real impacts on everyday citizens.

“Whatever party’s got the upper hand in terms of legislation, the other party is going to have an interest in having the debt ceiling in place,” he said. “There’s always one side that’s got an interest in retaining the debt limit as a cudgel or a sort of lever because it would be nice to threaten to gum up things and get whatever compromises they can get.”

What’s the impact of waiting up until the very last minute?

A level of uncertainty, Chinn said. Raising the debt limit sooner rather than later is better.

“Once you make people a little bit worried about whether the U.S. government will pay interest on its debt on time, then they’ll demand a premium —  a premium essentially means that interest rates will be higher than they otherwise would be — with that, the interest rate adds to your debt over time,” Chinn said. “So what it does is, paradoxically or ironically, depending on how you say it, you’re going to accumulate debt faster as a consequence of hitting the debt ceiling.”

So, ultimately, why should I care about the debt ceiling?

“I think you should care that your country pays its bills,” Irving said. Especially when those bills include salaries for federal workers and the military, food benefits and Social Security payments.

Plus, you know, after the year and a half we’ve had, the last thing we need is “catastrophic economic consequences.”