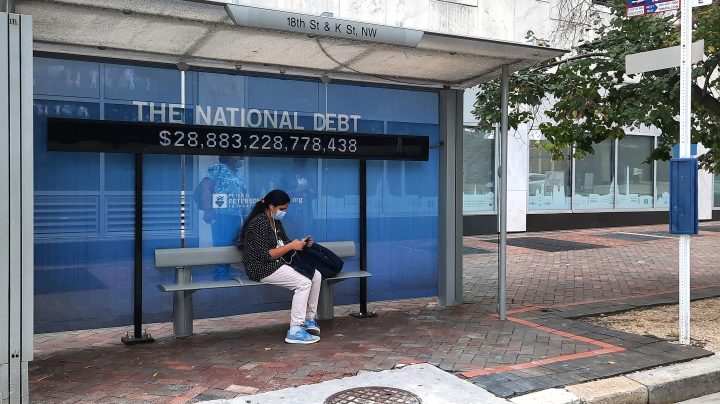 COPY
A sign at a Washington, D.C., bus stop showed the amount of the national debt on Oct. 25. The clock is ticking on another debt ceiling agreement to prevent a default. Julie Chabanas/AFP via Getty Images

A sign at a Washington, D.C., bus stop showed the amount of the national debt on Oct. 25. The clock is ticking on another debt ceiling agreement to prevent a default. Julie Chabanas/AFP via Getty Images
Listen Now

Last month, a short-term deal to raise the federal debt limit temporarily pulled the $23 trillion U.S. economy from the brink of a potential default crisis. But with another deadline looming on Dec. 3, the Treasury Department is still using “extraordinary measures” to avoid bumping up against the debt limit until lawmakers find a more permanent solution.

Experts warn that allowing the government to default on its debt obligations would be catastrophic for the economy. So, “Marketplace” talked to three people who study economic history about the origin of the government’s self-imposed limit on federal borrowing.

“Congress has revamped the limit, since World War II, 100 times,” said Kathleen Day, a lecturer on financial history at Johns Hopkins University. “It’s a recurring episode that has both political and economic consequences,” said Carola Frydman, a professor of finance at Northwestern University. “As long as we’re continuing to finance a lot of our budgets with deficit spending … Congress needs to revisit the issue from time to time,” said Eric Hilt, a professor of economic history at Wellesley College. “So it’s not a new thing,” Day said.

Where did the “debt ceiling” come from?

“The debt ceiling is a vestige of a time when Congress was much more heavily involved in federal borrowing,” Hilt said.

These days, Congress delegates decisions about how and when to issue bonds to finance government operations to the Treasury Department. But that hasn’t always been the case.

“Basically, every time the Treasury needed money, they would get authorized for a certain amount for whatever it was that they needed,” Frydman said.

One example is the 1902 Panama Canal Act, in which Congress authorized the U.S. Treasury to issue bonds specifically for funding the construction of a canal connecting the waters of the Atlantic and Pacific oceans.

Other projects were funded with their own bond issuances or their own taxes, and the Treasury had to keep those piles of money separated.

“That is just a type of conflict where the financial needs are, first of all, unprecedented, and also highly uncertain,” Frydman said. “And so this idea that you could go and specify how much you needed to borrow and you would be authorized for a particular type of security, a certain amount, it just doesn’t work.”

And so, said Hilt, “Congress passed a law granting the Treasury the authority to issue war bonds up to some fixed amount, I think it was $5 billion at the time. “And the whole idea [was] to give the Treasury more flexibility,” Frydman said.

“Eventually, that evolved into the debt limit that we have now, which is a single overall limit for all federal debt,” said Hilt. “The Treasury has the flexibility to decide the timing and the structure of different debt issues, but ultimately, the amount of the debt is determined by the deficit in the federal budget, which is controlled by Congress.”

How has it changed over time?

Since the first overall debt limit was established in 1939, the U.S. economy, and the national debt, have grown significantly.

The debt limit — that cap on how much the Treasury Department can borrow to pay for everything Congress has already authorized — is approaching $29 trillion.

“To have that in the back of your mind I do think gives people pause about how they’re spending money,” said Day. “Now, it hasn’t always been done with all the acrimony and political football-ness that we now have.”

In a letter to congressional leadership sent in September, Treasury Secretary Janet Yellen urged lawmakers to take action on the debt ceiling to protect the “full faith and credit of the United States.”

The government’s obligation to pay its debts is literally written into the 14th Amendment of the Constitution.

Today, the global market for U.S. debt is the biggest and most liquid debt market in the world precisely because the U.S. government pays what it owes.

“I do think it is generally understood that, you know, the consequences of bumping up against the ceiling and then potentially defaulting on some debt as it becomes impossible to borrow would be very bad for the economy,” Hilt said. “Making our interest payments, making required payments associated with our debt, is perfectly feasible, so a default, if it were to happen, it’s just political dysfunction producing it.”

“We get in this political tug of war until there is some kind of relaxation, and that’s been a very complicated, often painful process. So something that was supposed to make things more flexible has become quite binding and constraining,” Frydman said.

If you’ve got a question about economic history or why things work the way they do, ask Marketplace here.