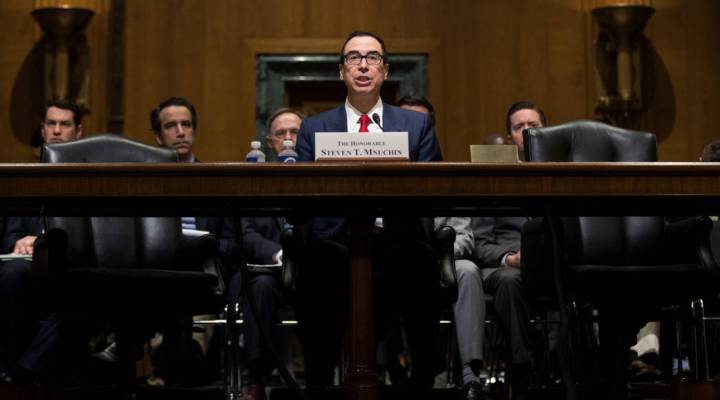 COPY
U.S. Secretary of Treasury Steve Mnuchin discusses 2018 budget proposals for the Department of Treasury and tax reform at a Senate Finance Committee hearing on May 25. Drew Angerer/Getty Images

U.S. Secretary of Treasury Steve Mnuchin discusses 2018 budget proposals for the Department of Treasury and tax reform at a Senate Finance Committee hearing on May 25. Drew Angerer/Getty Images
Listen Now

Treasury secretaries have been coming to Congress to ask for money to pay the bills since the days of Alexander Hamilton.

Here’s current Treasury Secretary Steven Mnuchin performing the ritual in front of the House Ways and Means Committee last May: “I urge you to raise the debt limit before you leave for the summer.”

Treasury needs the money to cover the expenses the government has already racked up for things like weapons, Social Security and Medicare. But Congress controls the purse strings, and it alone has the power to loosen them. That’s no accident.

“You know, the Founding Fathers had a very clear memory of the kings of Europe spending and putting their countries into debt and then handing the legislature — their parliaments — the bill,” said Tony Fratto, assistant Treasury secretary during the George W. Bush administration and now a partner of Hamilton Place Strategies.

At first, the Treasury Department had to get congressional approval every time it wanted to spend money.

“So Congress would authorize borrowing for specified purposes like, the Panama Canal or for the Spanish-American War,” said Frances Lee, who teaches government and politics at the University of Maryland.

Lee said the process was tedious and politically uncomfortable, and Congress micromanaged the Treasury Department’s spending. Then something bigger came along that made voting on every expense a luxury the government couldn’t afford: World War I. And the department needed lots of money, fast. So in 1917, Congress established two broad debt limits, one for short-term debt and one for long-term debt. Fast forward to 1939. On the brink of World War II, Congress agreed to combine all the government’s debt under one limit. For years, it worked reasonably well. Congress didn’t have to go through the political agony of voting on the debt limit that often. But now spending is increasing so fast, there are a lot more votes to raise — or suspend — the debt limit, making members of Congress who vote yes even more vulnerable to political payback.

“That basic dynamic of Congress not wanting to raise the debt limit has been going on at least 40 years,” said Mark A. Patterson, chief of staff at the Treasury Department during the first Obama administration and now a partner at the law firm Perkins Coie.

In 2011, Congress came so close to not raising the limit that Standard and Poor’s took away the country’s top credit rating. Patterson said everyone, including the president, was afraid Congress would let the U.S. default on its debt.

“And it was an extremely tense period,” he said.

Because voting to give the Treasury an unlimited credit card when its balance is already nearly $20 trillion would be the riskiest vote of all.