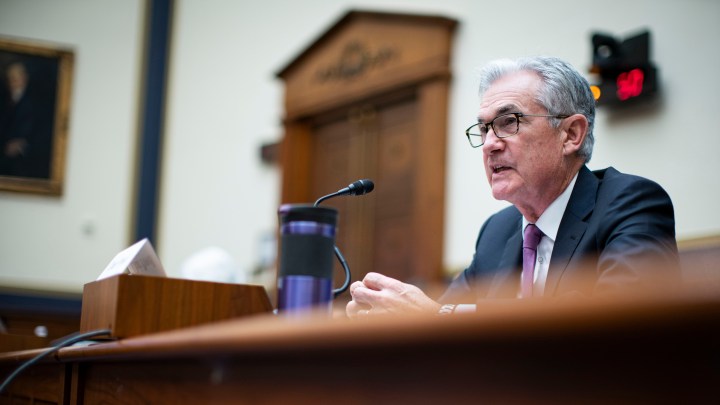 COPY
Federal Reserve Chair Jerome Powell speaks at a House hearing Thursday. Although the central bank has prepared for potential government defaults before, Powell warned lawmakers of the limits of the Fed's response. Al Drago-Pool via Getty Images

Federal Reserve Chair Jerome Powell speaks at a House hearing Thursday. Although the central bank has prepared for potential government defaults before, Powell warned lawmakers of the limits of the Fed's response. Al Drago-Pool via Getty Images
Listen Now

On Monday morning, President Joe Biden once again called on Congress to raise or suspend the debt ceiling.

Treasury Secretary Janet Yellen said something’s gotta give because, in around two weeks, the Treasury won’t have enough money to pay all its bills — and this is spending Congress has already approved.

So, what could the Federal Reserve do if Congress doesn’t act and the federal government defaults? It turns out the Fed has a playbook for this because Congress has come close to a default before.

On Oct. 16, 2013, the Fed governors, including Jerome Powell — who was not yet the chair — gathered at their Washington headquarters. Economist William English, a senior Fed adviser at the time, was briefing them. He said, in Fed-speak: “The Committee could, if it chose, engage in either outright purchases or CUSIP swaps.”

Translation: The Fed could buy defaulted Treasuries — U.S. bonds the Treasury missed a payment on because it was running out of money — or swap Treasury bonds that weren’t in default for those that were.

At the time, Powell called those options “loathsome.” English, who now teaches finance at Yale, can see why.

”Clearly, both of those steps would be stepping into the middle of a political dogfight,” he said.

The Fed, however, is supposed to be politically independent. Other pages in its default playbook include letting banks use defaulted Treasury bonds as collateral for short-term loans. The idea is to keep financial markets calm, according to Columbia law professor Kathryn Judge.

“And so part of it is just reducing the amount of uncertainty, any effort to dash for cash,” she said.

The Fed can only do so much, though. It’s kind of like bailing out a leaky boat, said former Fed economist Ann Owen. “To address a fundamental structural problem in how we’re financing our government is not something the Fed can do,” Owen said.

During a hearing last week, Chair Powell told members of Congress, hey, don’t look at me to solve your problems.

“If there were to be a default on our obligations, no one should assume the Fed or anyone else can shield — fully shield — the American people from the consequences,” he said.

Fed officials won’t say whether they’re having contingency meetings this time around to review that default playbook.