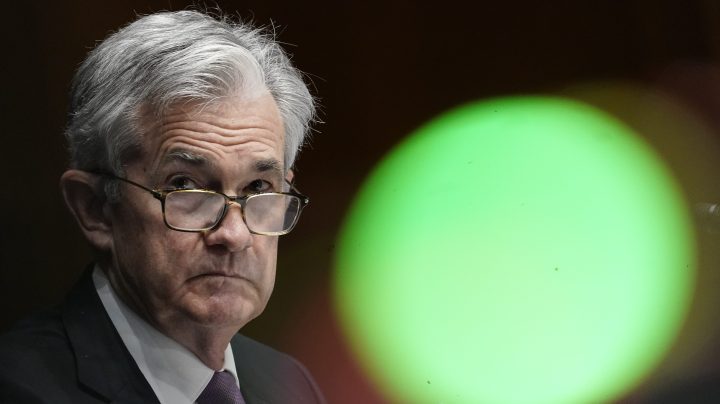 COPY
Federal Reserve Chair Jerome Powell. The Fed can do research and integrate climate risk into bank stress tests, economist Claudia Sahm says. But mainly it "follows orders; Congress tells it what to do." Drew Angerer via Getty Images

Federal Reserve Chair Jerome Powell. The Fed can do research and integrate climate risk into bank stress tests, economist Claudia Sahm says. But mainly it "follows orders; Congress tells it what to do." Drew Angerer via Getty Images
Listen Now

Recently, some progressive Democrats have urged President Joe Biden to appoint a Federal Reserve chair who will take a more active role in addressing climate change than the central bank’s current leader, Jerome Powell. But how climate risk fits into the Fed’s mandate is a controversial topic. A few months ago, Republicans on the Senate Banking Committee criticized the central bank’s attention to the topic.

Claudia Sahm, a former Federal Reserve economist and a senior fellow at the Jain Family Institute, wrote about what she thinks the Fed can and should do about climate change. The following is an edited transcript of her conversation with “Marketplace” host Kai Ryssdal.

Claudia Sahm: I feel very strongly that Congress needs to set the agenda in how economic institutions, government institutions, fight climate change — or address the risk it’s posing, the changes that are happening in the economy. The Federal Reserve follows orders; Congress tells it what to do, and it does that job to the best of its ability. As the law is currently written, the Fed does not have explicit duties with climate change. But what I’ve argued is the Fed can totally be an assist.

Kai Ryssdal: Yeah, so on that assist thing — before we go on — what do you make then of members of Congress, most of them on the progressive side of the aisle, saying the Fed has to do something now, and the rest of Congress is, you know, worried about debt limits and reconciliation and all the rest of that?

Sahm: Well, I give those members of Congress a lot of credit for making sure that the discussion of climate change stays front and center. I disagree with the calls to have the Fed do the effort. And I think those discussions should be pointed back at Congress. They need to get a plan. They need to pass legislation.

Ryssdal: OK, so failing that, nuts and bolts, what can the Fed do, in your estimation?

Sahm: So, the first thing the Federal Reserve can do is put its immense resources into the research. There’s a lot of great research out there right now. The Federal Reserve can bring it in-house, think about it in a policy framework and elevate it. That is happening right now. The San Francisco Fed is leading in those efforts. The other place where the Federal Reserve can start to really move the needle — and other central banks have done this — they do these things called stress tests. Basically, they give the banks a test and see, “Hey, if this bad thing happened in the world, would you be ready for it?” And the other central banks that have run these scenarios, not surprisingly, a lot of the banks aren’t prepared for existential risk. What the Fed can do is put that in the regular stress tests that they already do. So, that’s something the Fed has not done, and there is a very clear path to doing that.

Sahm: Right. So the reason that we have the Federal Reserve is to be the lender of last resort. So, in a big crisis, the Federal Reserve is there to get the money to institutions — it’s been primarily financial institutions up until this crisis — get the money to get through it. You know, in spirit, you could imagine an emergency lending facility to get the loans out to say, state and local governments doing investments in climate or businesses that are trying to really do something new and innovative to reduce their carbon footprint. But again, Congress. Congress would have to set up those emergency facilities. Right now, the Fed does not have the authority to create a new facility on its own. I think this one would be a rather expansive interpretation of “emergency” if we said climate change, but it’s just an example that the Fed could be part of the pipes.

Ryssdal: Here’s the question, though, right? The Fed is by its very nature a really cautious institution. So far, so good, right?

Ryssdal: OK. Given that caution, and look — and the politics involved with the Federal Reserve and all of that — how likely do you think it is that they take these significant steps that you’ve laid out?

Sahm: So, part of being cautious is you follow the rules. And if the rules change, the Fed changes. So, if Congress says, “You’re going to be in a space where you’re making climate-related loans,” guess what? The Fed does it, and they do it very effectively. I mean, this is one of the reasons that members of Congress that have disagreements about how urgent climate change is, have disagreements about how many authorities and responsibilities the Fed should have — they will fight back very hard on the Fed becoming part of the picture because they know the Fed will get the job done.