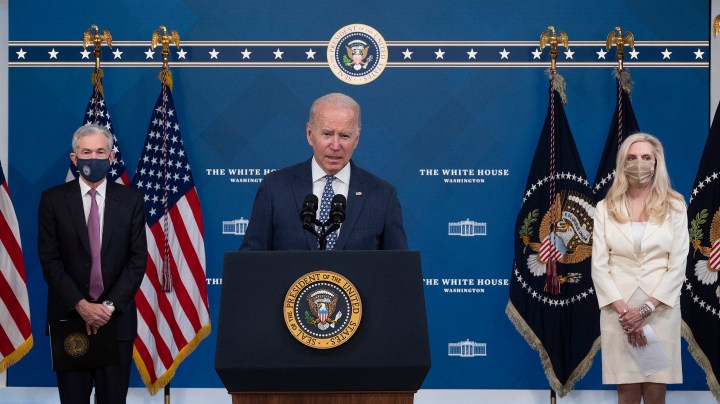 President Joe Biden announced Monday that he will nominate Jerome Powell for a second four-year term as Federal Reserve chair.

Biden also said he wants Lael Brainard, a member of the Fed’s board of governors, to be promoted to vice chair. Biden is thought to have considered Brainard for the top post.

Senate confirmation of both nominations is widely expected.

Some progressive Democrats had hoped Brainard would be nominated to replace Powell because of perceived differences between the two in regard to bank regulation and the climate crisis, among other things.

So what does all this mean for Fed policy?

Brainard, a Democrat and Barack Obama appointee, and Powell, a Republican and Donald Trump appointee, are pretty much on the same page when it comes to monetary policy aimed at controlling inflation, keeping people employed and guiding interest rates.

“The main difference has been on regulatory policy,” said Harvey Rosenblum, a former vice president of the Dallas Fed and currently a professor at Southern Methodist University.

“Governor Brainard has dissented several times from moves to soften some of the Dodd-Frank regulation,” Rosenblum said.

Brainard has disagreed with other Fed officials on, for example, relaxing supervision of smaller banks.

However, the job of vice chair for supervision, devoted to bank supervision, remains open at the Fed, and Brainard was not nominated for it.

That means the Fed’s approach is still unclear, according to Peter Conti-Brown, an associate professor of financial regulation at Wharton.

“Something President Biden did not do today was settle that controversy once and for all by identifying his nominee for that essential role,” Conti-Brown said.

Whoever gets that job, Powell has said he would defer to him or her on regulating Wall Street. Brainard and Powell have both stood behind efforts to get banks to think about climate change-related risks. But major moves on that issue will require more than new appointments, said Adam Posen, president of the Peterson Institute for International Economics.

“‘Cause ultimately you need legislation and regulation out of Congress to move the needle on decarbonization,” Posen said.

Brainard’s nomination to be No. 2 at the Fed does give her wide latitude to shape the research the Fed does and would focus her considerable expertise on monetary policy.

In his announcement, Biden added that other nominations will bring new perspectives and diversity to Fed leadership. Experts say those will significantly shape the Fed’s approach to regulation, climate and even digital currency.