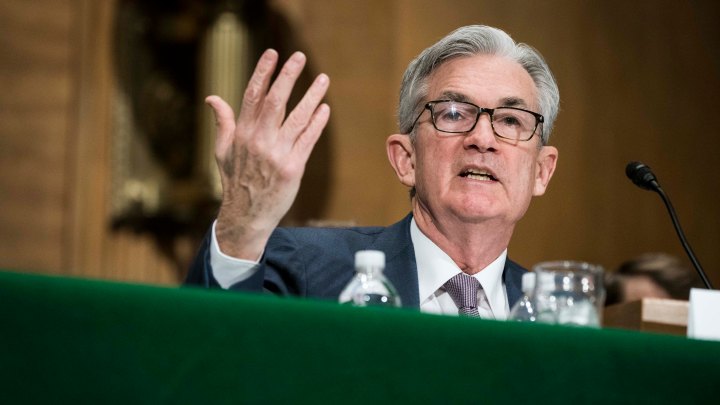 COPY
Federal Reserve Board Jerome Powell testifies during a hearing on "The Semiannual Monetary Policy Report to the Congress." Sarah Silbiger/Getty Images

Federal Reserve Board Jerome Powell testifies during a hearing on "The Semiannual Monetary Policy Report to the Congress." Sarah Silbiger/Getty Images
Listen Now

Federal Reserve Chair Jerome Powell makes an appearance on a panel at a conference on climate change today about how the financial sector can take action against climate change-related risks. How much power does the Fed have on the subject of combating climate change?

The extent to which the U.S. Federal Reserve should be involved in climate change policy is controversial. It boils down to whether the Fed’s policies are reactionary or if the Fed is on the offensive, said Christina Skinner at the University of Pennsylvania’s Wharton School.

If there’s a climate shock or a disaster, the Fed can adjust monetary policy to try to mitigate loss. What Skinner said it can’t do are things like “using its balance sheet to go out into the world and buy green bonds. To try and direct the flow of capital in that direction is not really on the table like it is for some other central banks.”

In some countries, central banks can take that kind of action. But the U.S. financial system isn’t set up that way.

Carolin Schellhorn at Saint Joseph’s University said the Fed, though, has to recognize that it doesn’t create monetary policy in a vacuum. “The central banks depend on each other, none of them work in isolation.”

She said private multinational banks need consistent guidance from central banks around the world to make investment decisions including those that align with climate change mitigation goals.