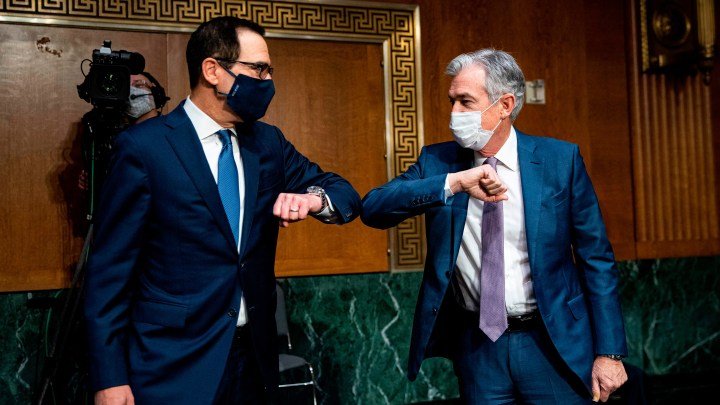 Federal Reserve Chair Jerome Powell and Treasury Secretary Steven Mnuchin testified before the Senate Banking Committee on Tuesday as part of their quarterly CARES Act report to Congress. Powell and Mnuchin summed up their views on the economy at the start of the hearing — and there was an obvious disconnect.

If you watched Powell and Mnuchin’s testimony — and I know you did — you’d think they were talking about two different economies.

First, Mnuchin said: “The October jobs report showed that the economy has gained back 12 million jobs since April.”

And Powell followed up with: “Although we welcome this progress, we will not lose sight of the millions of Americans who remain out of work.”

Powell looks at the big picture. Mnuchin is focused on the letter of the law. And the CARES Act did specify that some pandemic aid stop at the end of the year as the economy recovered.

Mnuchin acknowledges that some additional help is needed. But he also points to the falling unemployment rate.

“He’ll look at where we are this quarter relative to last quarter and say, ‘Look at the rate of improvement!’ ” said Kathryn Judge, a law professor at Columbia University.

The unemployment rate did fall to 6.9% in October. But that’s still almost double the rate before the pandemic hit the U.S.

Adam Ozimek, chief economist at the jobs website UpWork, said Powell sees the glass as half-empty, while Mnuchin says it’s half-full. And Mnuchin’s optimism could make it harder to persuade wavering members of Congress to vote for another relief package.

“You can’t really rally the troops as long as you’re describing the glass as half-full,” Ozimek said.

If Congress doesn’t pass another relief bill, Williams College economist Ken Kuttner said, the Fed will say, ” ‘Look, if you guys can’t get your act together and pass some fiscal stimulus, it’s going to fall to the Fed to try to take up that slack as best we can.’ “

But Kuttner said the Fed’s tools are not ideal for that. Powell has said repeatedly that the Fed makes loans, not the grants that struggling businesses and jobless workers need right now.