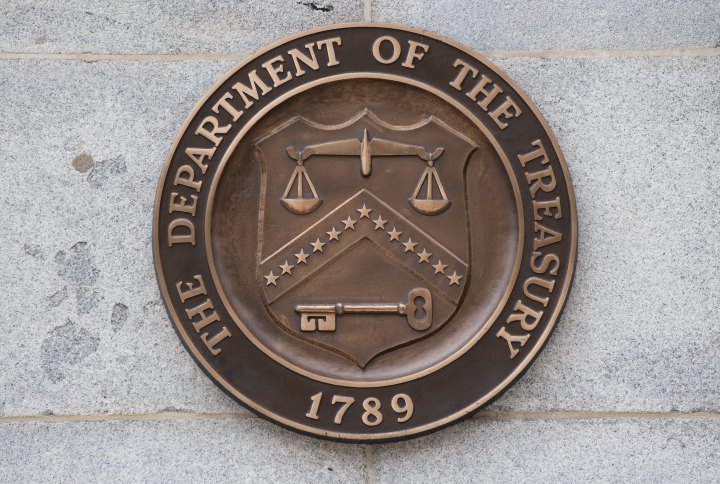 COPY
The logo of the US Treasury Department is seen on the outside of the Treasury building in Washington on August 19, 2011.

The logo of the US Treasury Department is seen on the outside of the Treasury building in Washington on August 19, 2011.
Listen Now

We’re 12 days away from the federal government running out of money. And Congress is still playing chicken with the debt ceiling. Remember, that’s the legal limit on how much the federal government can borrow, and if it’s not lifted by Oct. 18, the country won’t be able to pay its bills. Some economists think they have a way around congressional gridlock: a trillion-dollar coin made of platinum. We’re not kidding.

The trillion-dollar coin idea did not come from a Nobel Prize winning economist. It came from Carlos Mucha, a lawyer in Atlanta.

“I have never studied economics formally in my life,” said Mucha. He used to spend his down time in the comments section of econ blogs — for fun.

During President Barack Obama’s first term, one thread in particular sucked him in: What could the Treasury Department do if Congress didn’t raise the debt ceiling?

“It was like guys on a blog chatting, like who is the best left-handed pitcher of all time. It had no real-world application,” he said.

Here was Mucha’s idea: The Treasury has the power to mint money. But it can legally print only so many dollars. And coins are denominated based on what they’re made of, like gold, silver, copper.

Mucha spotted a loophole: Platinum. A platinum coin could be worth whatever the Treasury wants it to be.

“There’s no reason that tomorrow, the secretary of the treasury says, “You know what, I want to change the denomination to $1 trillion,'” he said.

Then the coin is deposited in the Treasury’s bank account with the Fed, and presto — money to fund the government. Debt ceiling problem solved.

“It sounds absurd, but the more you think about it actually the shinier it looks,” said Donald Marron, who was on the Council of Economic Advisors during the George W. Bush administration.

He said if Congress doesn’t raise the debt ceiling, minting platinum coins might be better than other options, like breaking the economy.

“Not paying Social Security, there’s a whole bunch of people they wouldn’t be able to pay,” he said.

There’s debate over whether the coin gambit would supercharge inflation. Marron thinks the Fed could manage it.

“If I were a global investor and saw that, I’d say, “Hey, this is not gonna work, it’s unsustainable,'” he said.

Zandi also said interest rates could shoot up overnight, which could spell catastrophe.

So when I asked who should be on the face of a trillion-dollar platinum coin, he hesitated.

“I don’t know if I’d want to put anyone on that coin. I think that would be an ignominious kind of honor,” he said.

Carlos Mucha, the guy who came up with the idea? He doesn’t want to be on it either.