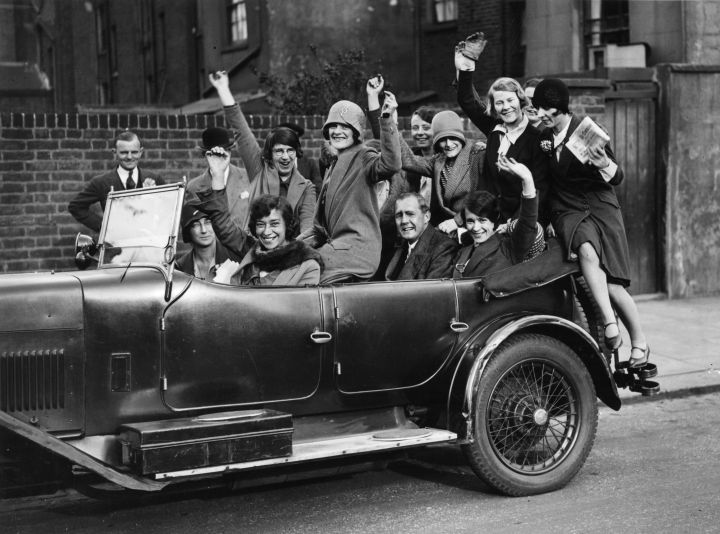 COPY
The economy is fundamentally different today than it was 100 years ago, but there are some parallels. Puttnam /Topical Press Agency/Getty Images

The economy is fundamentally different today than it was 100 years ago, but there are some parallels. Puttnam /Topical Press Agency/Getty Images
Listen Now

A year ago, when most of the country was under stay-at-home orders and people were losing jobs at an unprecedented rate, we asked three people who study economic history to explain whether the recession on the horizon was going to look anything like the Great Depression.

With the vaccine rollout well underway, weekly unemployment claims at their lowest level since the pandemic began and consumer confidence rising, we’ve asked them about a different historical comparison: the 1920s.

The economy fundamentally changed in the 1920s

“The 1920s, in so many ways, is relevant to now in both how it’s similar and how it isn’t,” said Kathleen Day, a lecturer at Johns Hopkins University and author of a book on the history of financial crises in the United States.

“One of the reasons why we talk about the 1920s now is because it’s the decade right after the 1918 pandemic,” said Carola Frydman, a professor of finance at Northwestern University who studies financial history. But that’s just one aspect of the 1920s economy.

“The 1920s began with a deep recession in 1920-1921, which followed turmoil of the World War I years,” said Eric Hilt, a professor of economic history at Wellesley College.

“What we see later on in the 1920s, as the country emerges from that recession, is a series of reasons that make the economy really, really grow,” Frydman said.

Some of that growth had to do with the adoption of new technology.

“Even though radio, and cars, and telephones had been around, they really took off,” Day said. “The 1920s is when we became a consumer-driven … technology-obsessed culture.”

Day said there were also innovations in business and finance, such as the widespread adoption of assembly lines and the rise of consumer credit. It was the first decade in which more people in the U.S. were living in cities than rural areas.

“When people think about the 1920s, you probably imagine wild parties with bootleg liquor at, like, Jay Gatsby’s house,” Hilt said. “And the end of the pandemic could see some of that.”

Because of government relief programs and all the spending people have been putting on hold while staying at home during the pandemic, Americans have an estimated $2 trillion in excess savings sitting in bank accounts.

“We’re going to see demand from that,” Frydman said. “You may say, ‘I’ve saved all this money, I haven’t been going out to eat, I’m going out.’ You know, boom!” Day said.

There are already signs that a post-pandemic consumer boom has begun. Advance retail sales numbers released by the Commerce Department on Thursday showed a 9.8% jump during March.

“There [are] some parts of the Roaring ’20s that I hope do not come back,” Frydman said.

“So this is a period of tremendous inequality, with a large proportion of total income going to the very top,” Hilt said.

“There were cracks in the economy,” Day said.

The decade ended dramatically with the stock market crash of 1929, which led to the Great Depression.

“But the consensus amongst many economists was that by ‘29, the economy was already starting to decelerate,” Frydman said.

Nobody is saying that we’re headed for a 1920s-like boom with an inevitable bust. The economy today is fundamentally different than it was 100 years ago, but there are some parallels.

“Then as now, there was this significant difference in wealth between the haves and the have nots,” Day said.

In the same year that millions of people lost their jobs and struggled to pay for housing and food, the number of billionaires on Forbes’ annual list of the world’s wealthiest people rose more than 30%.

“We are now returning to an era of very dramatic inequality,” Hilt said. “And it could be that some elements of our society may not share in the prosperity that we may very likely experience over the next few years.”