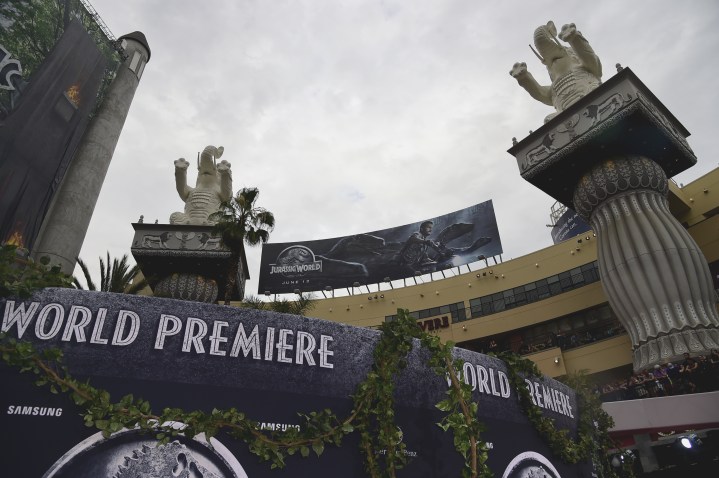 COPY
A general view of atmosphere at the Universal Pictures' "Jurassic World" premiere at Dolby Theatre on June 9, 2015 in Hollywood, California. Photo by Frazer Harrison/Getty Images

It looks like we may be heading into a bona fide summer movie season after two years of pandemic pain for theaters. “Jurassic World: Dominion” opens today, riding the tailwind of “Top Gun: Maverick,” which smashed box office records for Memorial Day weekend. There’s a mood of optimism at the movies and nothing says “summer blockbuster” like a big ol’ dinosaur movie.

“The ‘Jurassic’ franchise has some of the biggest, most momentous opening weekends in history,” said Paul Dergarabedian, a media analyst at Comscore, who adds this latest entry will likely follow in those giant footsteps, with more big releases following close at its heels, like Disney’s “Lightyear” next week and Warner Brothers’ “Elvis” the week after that.

“Now we’re getting back to a world where there’s a lot of different movies out there.”

Over the last two years of pandemic uncertainty, studios have held back many movies, said Phil Contrino with the National Association of Theater Owners. There might be one good box office run, then a long dry spell.

“So it was this stop and start,” he said, adding that with a full slate of big summer movies this year, moviegoers have the chance to make a habit of it. “Movie going begets more movie going … it’s a ripple effect from there.”

And as the current craze for dusting off old franchises demonstrates, Hollywood loves a comeback.