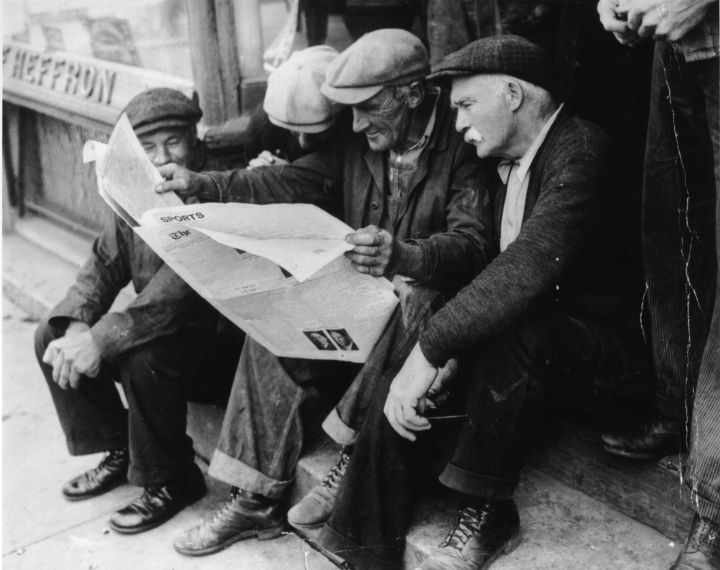 COPY
What happened during the Great Depression is very different from what is happening today, but there are some lessons in that history. Keystone/Getty Images
COVID-19

What happened during the Great Depression is very different from what is happening today, but there are some lessons in that history. Keystone/Getty Images
Listen Now

We’re starting to see some devastating economic indicators related to the global pandemic. More than 3 million people filed first-time unemployment claims the third week of March. On Thursday, we’ll find out how many people filed for unemployment in the fourth week, and on Friday, we’ll get the first monthly unemployment report since large parts of the economy started shutting down.

One of the big questions on your mind is probably: Just how bad things are going to get? That’s why we asked a few historians to tell us about the economic crises of the past — and in particular, the Great Depression — and what we should be keeping an eye out for today.

“It’s important to distinguish between the stock market crash in October of 1929 that everybody knows about and the stock market itself,” said Eric Hilt, an economic historian who teaches at Wellesley College. “The economy started to contract in probably summer of 1929. But it became a great depression rather than a severe recession probably starting in 1930 when a wave of bank failure started to occur,” he said.

“The Fed didn’t act as a lender of last resort to many banks,” said Kathleen Day, a professor of finance at Johns Hopkins University and author of a book on the history of financial crises in the United States. “Ten thousand banks failed, which, of course, caused another contraction of credit and contributed greatly to the depth and breadth of the depression,” she said.

“So what we’ve learned from that is that you need to be able to inject liquidity in a moment of crisis,” said Carola Frydman, professor of finance at Northwestern University. “You need to be able to bail out banks so that banks can keep on lending and restore confidence.”

If bailing out banks to keep the economy going sounds familiar, that’s because it’s what former Fed Chairman Ben Bernanke convinced Congress to do in 2008.

“One of my very first papers as a young academic argued that one of the reasons the Depression was so deep and so long was because the financial system collapsed,” Bernanke told “Marketplace’s” Kai Ryssdal in an interview in 2018, “I think putting capital in the banking system and making it work again, making it viable so that it can provide credit, was essential.”

“If I were concerned about something like a Great Depression recurring, I might think about different warning signs that one might watch for, and one of them is policymakers choosing not to respond to the crisis,” Hilt said.

Chair Jay Powell and the Federal Reserve have taken aggressive actions in response to the COVID-19 crisis, including cutting interest rates to basically zero, buying trillions of dollars in bonds to put more money into the financial system and lowering the rates it charges banks to borrow money.

“So that warning sign is not going off. The historical pattern does not seem to be repeated in this context,” Hilt said.

As for what to watch for to help us understand what kind of crisis this is going to be, Hilt, Day and Frydman all said it’s important to watch unemployment.

“The changes in unemployment during the Great Recession were relatively short lived,” Frydman said. In the Great Depression, on the other hand, unemployment rates remained very high for about a decade. “So I think that is something [to watch] as I look forward trying to understand whether some of the shocks that we’re seeing now are going to be temporary or, or a lot more long lasting,” she said.

Hilt, Frydman and Day said other indicators to watch for include bankruptcies, the inflation rate and signs of distress in the credit markets.