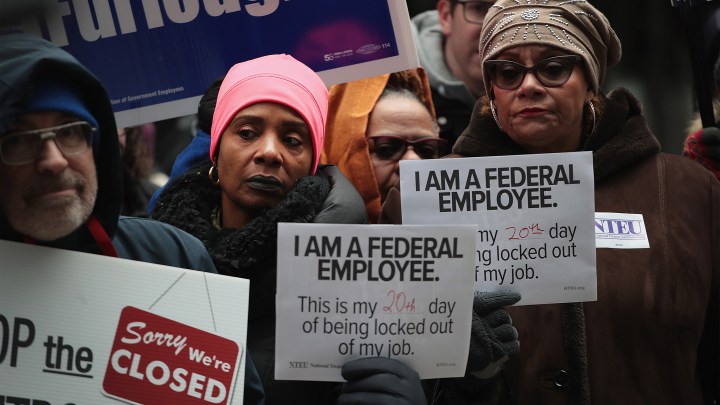 Arleja Stephens used to be a security guard at the Lincoln Memorial, making around $12 an hour. She didn’t work for the federal government; her employer was a staffing agency the government hired to handle monument security. But when the government partially shutdown on Dec. 22, 2018, she was temporarily laid off.

The shutdown ended on Jan. 25, 2019. Federal employees weren’t paid for those 35 days, and neither were contractors. But federal workers were eventually paid back when their agencies reopened. Government contractors weren’t so lucky and some, like Stephens, are still recovering.

Stephens shares a three-bedroom apartment in suburban Maryland with her four sons, her boyfriend and her sister. She is the main breadwinner and said the shutdown ruined Christmas for her kids that year. She only spent on necessities.

“I bought them some shoes,” she said. “And that’s all that I was able to buy them. That was about it.”

Then, a week into the shutdown, Stephens decided she couldn’t afford to wait it out. She quit her security job and went to work at a restaurant. But while she waited for that first paycheck, she still had to cover her expenses: about $800 a month for food, $1,300 for rent, plus a car payment and utilities. Stephens borrowed about $2,000 from family and ran up her credit cards. She paid her family back but still owes about $1,200 on the cards.

“I was just devastated,” Stephens said. “I went into such a hole during that time. I’m still crawling out of that hole.”

To get out of that hole faster, Stephens went back to a work for a contractor as a security guard at the National Museum of African American History and Culture. The money is better, but she still lives paycheck to paycheck.

“There is a huge uptick and clearly a huge dependence, increasing dependence, on these temporary help services,” said Laura Padin, a senior staff attorney at the National Employment Law Project.

Padin said the amount of money paid to temporary staffing agencies doubled during the first two years of the Trump administration to $1.7 billion in 2018.

Paul Light, a professor of public service at New York University, estimates about 1.2 million contractors were affected by the shutdown, including data analysts, logistics managers and contract specialists to oversee other contractors. Defense companies and other big firms didn’t lay off their mostly white-collar workers during the shutdown.

“Yep, we understand that we’re not getting money,” Light said, echoing those companies’ strategies. “We’re just going to let some things slip, or we’re going to do some training, and we’ll charge that once the money starts coming in.”

Or they transferred workers to contracts not affected by the shutdown. David Berteau, president and CEO of the Professional Services Council, a trade group for all sorts of contractors, said his members had no idea the shutdown would be so long, which has made it harder for his members to plan or recruit top talent. Berteau said one contractor had 17 new people lined up and due to start during the shutdown.

“And all of those people decided it’s too risky going to work for a contractor who depends on the government, who is vulnerable to a government shutdown,” Berteau said. “We’ll go take a job with another company.”

Stephens, the museum security guard, has been keeping an eye out for another job, even one outside of government where she wouldn’t have to worry about shutdowns.

“It’s worrisome to know that everything could be taken away again — or, you know, your money stops coming in,” Stephens said.