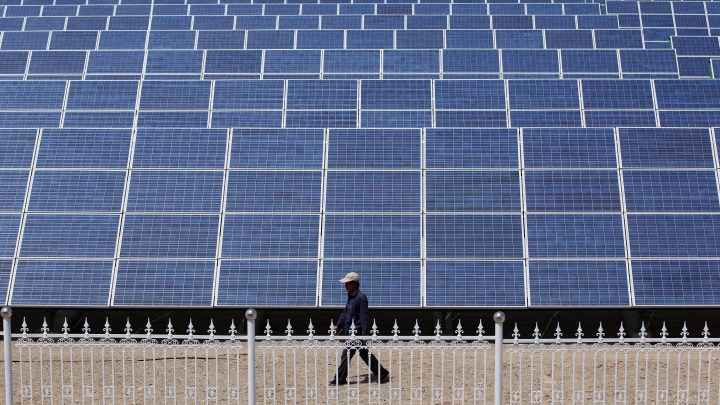 Chinese intelligence officer Yanjun Xu is awaiting sentencing in federal court after he was convicted of attempted theft of trade secrets and economic espionage last month. The U.S. government charged him with trying to steal sensitive engine technology from a U.S. aviation company by extracting information from an employee.

Xu’s purpose, intelligence officials say, was to hand that technology over to a Chinese company that the Chinese government hopes could rival Airbus and Boeing.

Xu is the first Chinese intelligence officer extradited to the U.S. to stand trial for espionage, according to the Department of Justice. (He was arrested in Belgium.) But U.S. prosecutors have been accusing Chinese spies of stealing trade secrets for years.

The list of victims is long: solar and steel companies, makers of computer chips and airplanes, labs doing COVID-19 research, health care companies, universities — it goes on and on.

“And it is most certainly guided by the Chinese government,” said Michael Orlando, acting director of the National Counterintelligence and Security Center, a government agency that focuses on threats from foreign powers.

“China has a number of national plans, which include Made in China 2025 and their 14th five-year plan, which lists about 10 technologies that they are seeking to dominate in,” he said.

These include technologies upon which the industries and wealth generators of the future depend, like artificial intelligence, quantum information systems, biotech, semiconductors and autonomous systems.

“The Chinese government is using all instruments of national power, from espionage to legal acquisitions and joint ventures to acquire specific technologies, so they can be the world leaders in those technologies,” Orlando said, adding that China’s government will use whatever means necessary — legal and illegal.

That has been plain to see for Mark Widmar. He’s CEO of First Solar, the only large-scale U.S. solar cell manufacturer to survive competition from China’s — at one point — highly subsidized solar industry.

First Solar uses a specialized technology for its solar panels that Chinese companies do not have and are, he said, trying to acquire one way or another.

“We spend a lot of time around cybersecurity because we are constantly being attacked, and we know a lot of the efforts are being done with companies in China to get access to our data and our information,” Widmar said.

At the same time, Chinese companies are using more above-board methods, as well.

“I have been approached by Chinese associates requesting us to manufacture in China, and they have highlighted benefits they would be willing to provide around subsidies, not having to pay for buildings, highly subsidized capital and other benefits they would provide,” he said.

Despite the allure, Widmar’s refused. “Because we don’t want to expose our technology to potential risk of theft, so we’ve stayed away from manufacturing in China, and that’s one thing that’s helped us.”

China views national security and economic security as one and the same, said Anna Puglisi, director of biotechnology programs and senior fellow at Georgetown University’s Center for Security and Emerging Technology.

“China really looks at development of science and technology as zero-sum,” she said. “That’s really the driver behind a lot of the activities that we see.”

The importance of this is understood at the highest levels, Puglisi said. In a National Development and Reform Commission report from 2017, “[Chinese President Xi Jinping] describes science and technology as a national weapon, that if China wants to be strong, it must have a powerful science and technology,” she said.

When it comes to sensitive technologies, the relationship between Chinese firms and their government is different than in economies like the United States, Korea, Japan or Europe. Chinese firms can ask specialized “science and technology diplomats” to help them connect with foreign companies that have the technology they need, Puglisi said. “And [those diplomats] help and try and broker those kinds of arrangements and collaborations or business deals.”

The arrangements between the U.S. and Chinese companies have, at times, opened the way for the transfer of that technology to Chinese businesses, both in legal and illegal ways.

“Nonmarket decision-making and state subsidies give unfair advantage to China’s companies and forces U.S. and other Western companies to have to make concessions and give up technology they do not have to do other places in the world,” Puglisi said.

Chinese firms can also ask China’s intelligence services for help, said Roy Kamphausen, president of the National Bureau of Asian Research and executive director of the Commission on the Theft of American Intellectual Property.

“Can you imagine if a major American company could say to the U.S. government, ‘Hey we’re entering into negotiations with a partner in X, Y, Z country, can the CIA help answer these questions about this company’s operations and trade secrets?’ Even as you say those words, it’s ridiculous, but it’s a very real thing that’s happening,” Kamphausen said.

He and intelligence officials say hacking — like the cyberattacks First Solar endures — have been a powerful tool used by China’s government to extract technology and economic advantage from foreign companies.

In 2015, U.S. President Barack Obama, Xi Jinping by his side, announced an agreement between the two leaders that neither country would “conduct or knowingly support cyber-enabled theft of intellectual property” for commercial gain.

China has not lived up to that commitment, and in a recent report, CrowdStrike called it “one of the most prolific state-sponsored cyber actors on the planet,”

Cyberattacks launched by any of the 51 groups in China tracked by CrowdStrike — including groups associated with the People’s Liberation Army, the Ministry of State Security and Public Safety, as well as regional intelligence services — map closely to China’s stated ambitions for industries and technologies the government wants its country to dominate, Meyers said.

“There’s just a huge shopping list,” he said. And the attacks have been evolving, Meyers added.

They now go after not only individual companies but the services those companies use, like telecom companies, as a portal to multiple targets.

“They’re using the information they’re gleaning from attacks against telecoms to enable going after other targets that might be using those telecoms, businesses or enterprises hosting on telecoms,” he said.

Meyers said China’s government has been at this for decades, with a long-term vision.

“Western businesses are thinking quarter-to-quarter, not 10 to 15 years down the road, which is where Chinese companies are,” he said. “They’re willing to wait until 2049. They are patient, and that’s their secret weapon.”

China’s embassy did not respond to a media inquiry for this story. In public comments, officials have called these kinds of allegations fabrications.

It’s hard to estimate the cost of this technology transfer to the U.S. economy through hacking, theft of intellectual property, knockoff products and other means. But Kamphausen at the IP commission has tried.