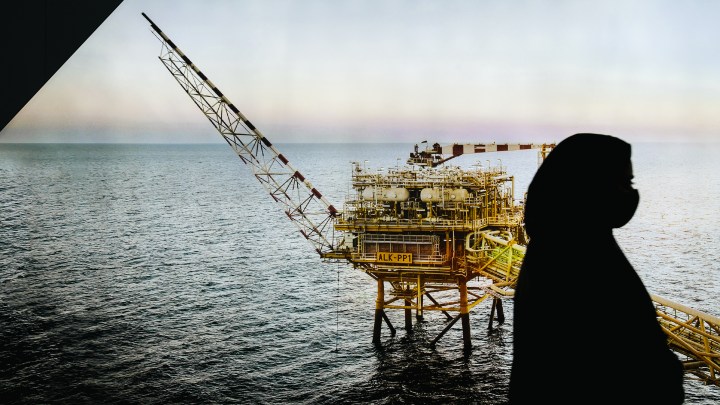 COPY
A poster of an offshore drilling station at the World Petroleum Congress, where the oil industry is discussing its role in the future of energy. Brandon Bell via Getty Images
A Warmer World

A poster of an offshore drilling station at the World Petroleum Congress, where the oil industry is discussing its role in the future of energy. Brandon Bell via Getty Images
Listen Now

Lots of oil executives are hanging out in Houston this week for the World Petroleum Congress. It’s the first time in more than 30 years that organizers are holding the conference in the United States.

A banner that welcomes visitors says a lot about where the industry is right now. It reads: “Welcome to Houston — Energy transition capital of the world.”

So, how are those conversations about transitioning away from fossil fuels going?

We’re not going to stop using petroleum overnight. But there are definitely doubts about the long-term future of companies that focus most of their resources on extracting oil and natural gas.

“The best description of what’s going on with the largest oil and gas companies is caution,” said Greg Priddy, an energy market consultant in Washington, D.C.

Oil companies are worried about a couple of things, Priddy said. Oil demand for one, plus environmental, social and governance issues that have become more important to investors.

“And a lot of that tends to lead them in the direction of investing less and getting a bit smaller,” Priddy said. Cutting costs allows Big Oil to focus on delivering returns to investors, he added.

Oil companies are also studying what the pandemic has done to demand to try to get a better sense of what to expect during the transition away from fossil fuels, per Charles Driscoll, an environmental engineering professor at Syracuse University.

“We’re in a very abrupt transition now, with energy systems coming out of COVID. And that’s, you know, problems like this, so are likely to be more prominent going forward,” Driscoll said.

The chief executive of Saudi Aramco, the world’s biggest oil producer, spoke at the conference Monday and warned that rushing a transition to renewable energy would cause spiraling inflation and social unrest.

Sara Vakhshouri, president of the oil and gas consultancy SVB Energy, said she doesn’t think the future will be that dark, but “the demand for energy is growing, so we are going to use more energy than we are using today. That means the demand destruction for oil is not going to be so great,” she said.

The transition away from fossil fuels is important, Vakhshouri said. But policymakers calling for zero investment in oil are taking a risky approach.