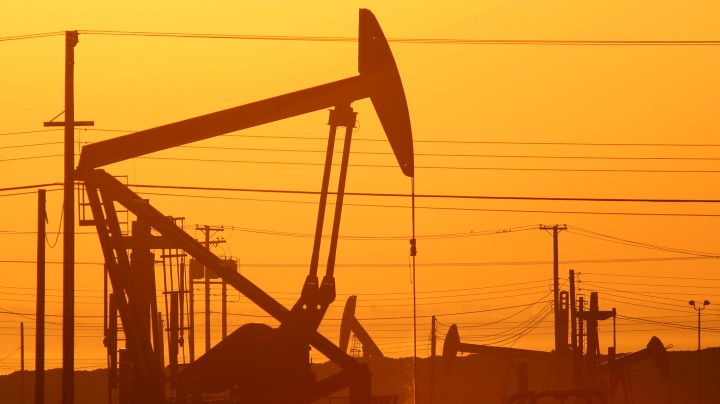 COPY
A fracking pump jack in California. Fracking for oil is generally a lower-risk and shorter-term proposition than vertical drilling. David McNew/Getty Images
A Warmer World

Even with the best intentions in regard to cutting carbon emissions — and plenty of funding to back them up — we are going to be using oil for a while.

There are basically two ways to get oil out of the ground: You can drill vertically — straight down — and build one of those oil derricks you’ve seen in movies. Offshore drilling works pretty much the same way.

The other method is to drill horizontally, then pump a slurry of water and sand into the holes to hydraulically fracture the rock and force the oil out. That’s known as fracking.

Neither method is great for the environment, but environmentalists really dislike fracking because of its potential to contaminate groundwater, increase earthquake activity and impose long-term geological effects.

The oil and gas industry seems to be betting that fracking is the better method to use as we try to reduce carbon emissions to net zero.

That’s what oil executives have in mind when they’re deciding where to drill and whether to drill vertically or frack.

“If there’s going to be an energy transition and operators are considering, ‘Should I invest on a big, large-scale, long-term project or a short-term one?'” said Brian Prest, an economist at Resources for the Future. “Well, obviously, the long-term project is going to be much more exposed to the risk of reduced oil demand or environmental policies than one where you can get in and get out in a few years.”

In other words, fracking — for the most part — is a lower-risk proposition.

That’s how Mike Oestmann’s thinking lately. He’s president and CEO of Tall City Exploration III and has been drilling oil wells in West Texas for years.

I met up with him in the parking lot of a gas station less than a mile from the Permian Basin Petroleum Museum in downtown Midland. He pointed to crews moving steel pipe casings that will be driven down a well once it’s ready to produce oil. I asked him about the production timeline for a well like this.

“They all look same,” he said as he grabbed a piece of paper and a Sharpie and sketched a quick graph.

“They come on like this,” he noted as he put a dot high up on the vertical axis. “They kind of do this for a month.” The line continued for a bit, suggesting steady production at the top.

“And then they just go like this,” he said, drawing the line almost straight down the page, then flattening it out near the bottom. “And this is what it looks like for the duration,” he concluded as he drew a horizontal line just above zero.

This is called a decline curve. And it’s how fracked wells produce over time.

“You put your rigs to work, you invest your capital, and most of the production you’re going to get from a fracked well is going to come very early in the first couple of years of its production. Then it has a very steep decline rate,” said Jason Bordoff, co-founding dean of Columbia University’s Climate School.

This means drillers have to make enough money to pay back investors in the first couple of years before production falls off a cliff. And investors want to be sure they not only get their money back, but make a profit too. That’s harder to guarantee with a vertical well that will produce for decades while the price of oil bounces up and down.

But with a fracked well, the risk is a lot lower because the timeline is a lot shorter.

“That speaks to why, along with geopolitical reasons, why we’re seeing drilling increasing in the short term,” said Catie Hausman, an associate professor of environmental and energy economics at the University of Michigan. “But I think it’s also clear that investors are worried about the long term.”

Long-term, as in decades long — by which time Americans might not be using fossil fuels anymore.

Gabe Eckhouse studies the political economy of oil at the University of California, Berkeley. He wrote a paper last year about what he calls fracking’s short-cycle revolution.

He argued that if you follow the money, investors are leaning into short-term fracking — meaning they’re already planning on a transition away from oil.

“The amount of capital currently flowing to oil and gas is commensurate with a net-zero-by-2050 transition on a global level.”

But for that to work, he said, the U.S. needs to invest a lot more in renewables.

“On the one hand, we are not doing anything, you know, close to what is required for net-zero transition in terms of clean energy,” Eckhouse said. “But at the same time, for the kind of aging oil and gas production, we’re investing as if a renewable energy transition was happening.”

He called the government’s climate investment via the Inflation Reduction Act a good start.

Hausman at the University of Michigan agrees but said we’ve still got a ways to go. And there are still too many gasoline-powered cars and power plants running on natural gas to phase those fossil fuels out.

“It’s just not realistic to think of oil and gas going away within the next five years,” she said. “And so, for now, it looks like fracked wells are here to stay for the short term.”