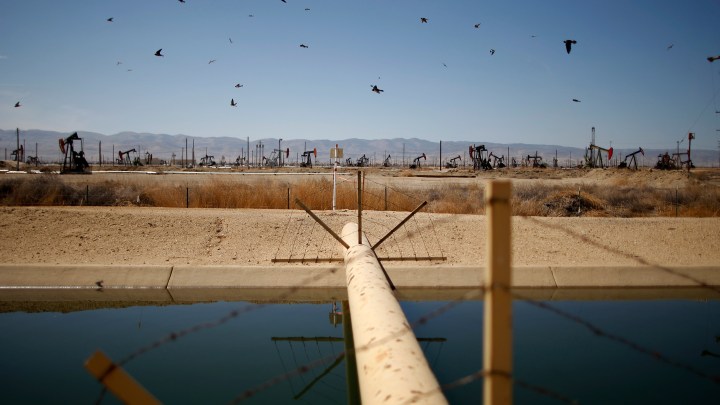 COPY
Swallows fly past a high-pressure gas line crossing a canal in an oil field over the Monterey Shale formation where gas and oil are extracted using fracking near Lost Hills, California. David McNew/Getty Images

Swallows fly past a high-pressure gas line crossing a canal in an oil field over the Monterey Shale formation where gas and oil are extracted using fracking near Lost Hills, California. David McNew/Getty Images
Listen Now

But that doesn’t necessarily mean drilling companies are making money.

One shale company, Pennsylvania-based EQT Corporation, just had unhappy investors take over the management, because EQT was not very profitable.

Natural gas companies are struggling, in large part because the prices they’re selling at are so low.

American companies have mastered fracking technology, but too many jumped in, according to Tom Sanzillo of the Institute for Energy Economics and Financial Analysis.

“Fracking has enabled businesses to produce more and more and more natural gas, to the point where there is a saturation of the market, and depressed prices,” he said.

You might think low prices would get drillers to take their feet off the gas. But no. Some had already locked in higher selling prices with buyers. And some executives get paid based on how much they drill, said Charles Schliebs, managing director at Stone Pier Capital Advisors.

“Executives will manage their activities directly related to what their compensation incentives are,” Schliebs said.

Over-drilling has brought over-spending on labor, supplies and machines.

Nine out of 10 shale companies in the U.S. spend more than they earn, said Alisa Lukash, a senior analyst at Rystad Energy. So, she said, they borrow.

“I would say the whole industry is highly indebted, because shale is a very young industry, really, and it requires a lot of capital in the initial stages, initial years of development,” she said.

There’s been a cry for natural gas producers to sober up and slow down … from unhappy investors not making money.

Analyst Leo Mariani at KeyBanc Capital Markets said some are getting out.

“Energy equity investments have been very weak. There’s been a handful of companies where there’s been some level of activism. We’ve seen more shareholders speak out,” he said.