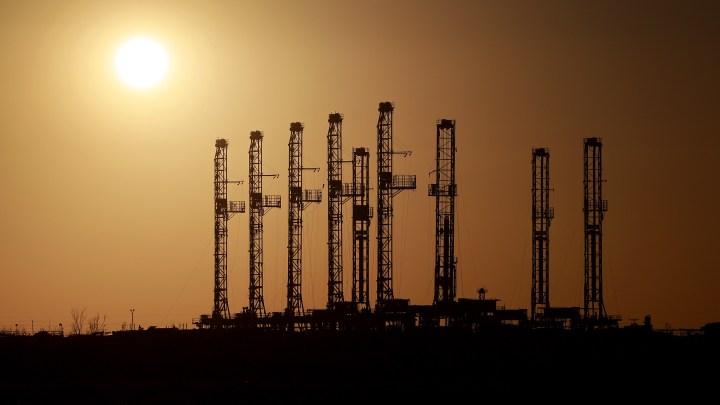 Back in March, as Russia’s invasion of Ukraine was sending the price of oil sky-high, President Joe Biden noted that the oil and natural gas industry has 9,000 permits to drill that it isn’t using. In other words, 9,000 chances to increase the supply of oil and gas — and drive down prices.

To be clear, Biden wasn’t wrong about that number, but citing it as evidence that energy companies are sitting on their hands to keep prices high needs a bit more context. So, I took a trip out to ground zero for domestic oil and gas production — Texas’ Permian Basin — to hopefully bring some back.

Patrick Cohorn, operations manager at a family-owned energy company called Henry Resources, headquartered in Midland, Texas, drove me out to a stretch of land just north of the town of Rankin. It sits about an hour outside Midland and it’s where Henry’s crews are fracking for oil. He unfurled a map on the bed of his big, red, muddy pickup truck.

A frack pit is basically a pond full of water that’ll be used to help force oil out of the ground.

“Everything in yellow is acreage that we own and operate,” he told me. “All of these black sticks are wells that are drilled underground. They exist. So the surface pads, as you can see from here, it’s kind of hard to see. But that location is just right up there, where the frack crew is.”

This is all private land, which is where 90% of the oil produced in the U.S. comes from. Private property is also where almost all of the oil in this part of Texas comes from. Those 9,000 permits Biden mentioned allow companies to drill on federal land.

“You know, if the federal government is complaining about 9,000 leases, not having anything done with them — well, that’s just a very small fraction of the total amount of leased acreage out there,” said Hugh Daigle. He worked in the oil and gas industry for five years and now teaches petroleum engineering at the University of Texas at Austin.

“What the administration is doing is they’re trying to do what they can, with what little leverage they have, to try to get oil and gasoline prices down.”

Out in the Midland Basin, a whole slew of ranchers own the rights to the oil underground. Cohorn at Henry Resources said his land and legal crew started acquiring mineral leases in 2016.

“It took us all of probably three to four years to consolidate enough acreage to start drilling to begin with,” he said.

Before they could start drilling, they had to negotiate with the folks who own the land. They aren’t necessarily the same people who own the mineral rights.

“So you get the mineral position leased, then you have to go to the surface owner and negotiate good terms and a good understanding of how you’re going to use his surface and make him happy, so that you can come out here and start doing all the stuff that we have to do to get to and from our wells,” Cohorn said.

First, drillers have to build roads to get the crews and equipment out there. Even then, he said, getting oil out of the ground takes time. And wells that have been drilled need to be maintained.

He took me to a well in the middle of this patch of land that, up until a couple of months ago, was producing a good amount of oil. Then, an electrical submersible pump, or ESP, was sucked down into the well. A crew of roughnecks were on a platform sending metal pipes down the well to try to get it unclogged.

“Those guys are tripping in and out to go in and try to latch on to that ESP and try to pull it out,” Cohorn said. “It’s almost like Johnny Cash’s Cadillac — we get it one piece at a time.”

It’s a slow process. Cohorn said subcontractors are so busy, they can only make it to wells like this every so often. As a result, Henry Resources has been standing by with an unproductive well for two months. Labor is in such short supply in the region that stories like this are common, Cohorn said.

“Most of the time, it’s rented equipment. We bring in a vendor, it’s their drilling rig, their frack crew, they outfit with their own workforce to make the work happen. We’re just there as oversight.”

He said not only is labor in short supply, but steel pipe and other equipment are on back order for months. The sand and water necessary for fracking are hard to come by too. And any company that wanted to start drilling on those 9,000 federal leases would face the same problems.

Closer to downtown Midland, Mike Oestmann drove me around a frack site to see how things are progressing. He’s the CEO of a company called Tall City Exploration III. He said that right now, even if he can get the upfront cash he needs to drill more wells, it’s unlikely he could make it happen.

“If you came to me and said, ‘Mike, here’s $100 million. We’re a company running two rigs. Here’s some money, go get a third rig.’ I can’t get the pipe. I can’t get the people to do the work,” Oestmann said.

Oestmann said he really doesn’t like the way the Biden administration talks about his industry. Like when the president points out that some of his competitors are sitting on 9,000 federal land leases they haven’t drilled.

“I try to think of what could they do immediately to make a difference, and I think, ‘Change that rhetoric.’ That’s an easy thing to do,” he said.

Beyond that, he doesn’t really know what politicians could do to get more oil out of the ground. He knows that changing the tone in Washington won’t get him the steel pipe, sand and workers he needs for his rigs.

At the same time, this is a really profitable business, especially with West Texas Intermediate trading at close to $100 a barrel. And the bottom line is, if people like Mike Oestmann and Patrick Cohorn could drill more, they would.