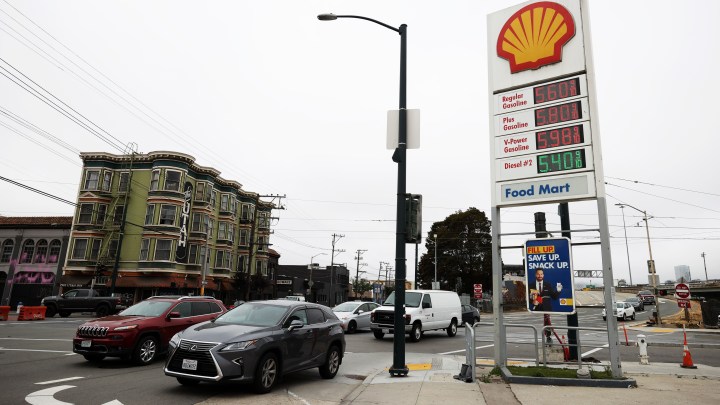 COPY
Gas prices near $6 a gallon at a Shell station on July 12 in San Francisco. Justin Sullivan via Getty Images

Gas prices near $6 a gallon at a Shell station on July 12 in San Francisco. Justin Sullivan via Getty Images
Listen Now

The Biden administration did something yesterday that had some folks in the energy industry scratching their heads: It wrote a letter to OPEC and its allies urging the cartel to boost oil output to tackle rising gasoline prices.

Texas Gov. Greg Abbott responded on Twitter, writing, “Dear White House: Texas can do this. Our producers can easily produce that oil if your Administration will just stay out of the way.”

Except, it’s not quite that simple. U.S. politicians pressuring OPEC is not a new thing. President Bill Clinton did it, as did President Donald Trump, according to Antoine Halff at Columbia University.

“There’s a tradition of calling on OPEC and putting the blame on OPEC for high prices and asking very publicly OPEC to increase supply to bring the price down,” he said.

But squeezing OPEC rarely works. It’s a powerful cartel that doesn’t have to lose too much sleep over rising gas prices in the United States. American politicians also have limited control at home, said Sara Vakhshouri, president of the oil and gas consultancy SVB Energy International.

“So, the U.S. government has no say really on how much the oil production should be,” she said.

Clark Williams-Derry, an analyst at the Institute for Energy Economics and Financial Analysis, said that at the moment, the U.S. oil industry is telling itself, “don’t overproduce, don’t pretend like today’s price blip is a great long-term opportunity. Exercise what they call ‘capital discipline.'”

Which, Williams-Derry said, is shorthand for just drill less.

“This is an industry that’s been burned again and again by overproduction. They respond to high prices by ramping up drilling. And then they wind up producing too much oil and gas and the prices come back down, and they don’t make the money they were expecting to,” he said.

Something else unexpected: Environmentalists were surprised when the Biden administration encouraged OPEC to ramp up production.

“If we’re interested in transitioning and decarbonizing the economy, which I think is an important goal of the Biden administration, having higher gas prices helps move us in that direction,” said Charles Driscoll, an environmental engineering professor at Syracuse University. Because consumers paying, say, $5 a gallon for gas could motivate some to make the switch to an electric car.