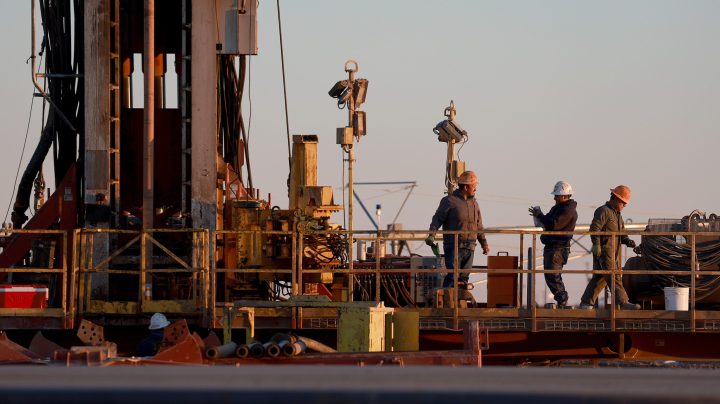 COPY
In the early part of the pandemic, the Texas oil and gas industry shed 20% of its workforce. Joe Raedle/Getty Images

In the early part of the pandemic, the Texas oil and gas industry shed 20% of its workforce. Joe Raedle/Getty Images
Listen Now

Texas oil and gas employment may not rebound to pre-COVID levels. Ever. That’s according to a new report from the Institute for Energy Economics and Financial Analysis. It also says the industry is not the job creator that many believe it is.

At ground zero of Texas oil and gas employment — the Permian Basin — industry executives are telling a different story.

Between September 2019 and September 2020, oil and gas extraction and affiliated industries in Texas shed about 20% of their workforce. And while there’s been a hiring uptick over the past few months, the industry isn’t back to pre-COVID numbers.

“We’re only about halfway there as far as the recovery goes,” said Trey Cowan, who wrote the report for the IEEFA. “And it looks like we’re starting to plateau.”

Cowan said there’s a number of reasons for the slow pace of hiring. One is that operators say they can’t find people who are healthy enough to work on a rig and can pass a drug test.

But it could be efficiency that’s leading to fewer jobs in places like the Permian Basin.

“They’re getting more oil out of the ground, with fewer people having to work for it,” said Hugh Daigle, a professor of petroleum engineering at the University of Texas at Austin.

“In terms of its spending and its purchases, it is still huge,” said Michelle Michot Foss, an energy studies fellow at Rice University in Houston. “But the labor-capital ratio is shifting.”

But Cowan at the IEEFA said the tried and true narrative that oil and gas will continue to be a driving force for employment in Texas is growing old.

“The idea of creating policy around the oil and gas industry being a job creator is kind of a foolish way of looking at it,” he said.

Oil and gas jobs follow the same boom and bust cycles the industry’s been dealing with for decades, he said. And everyone in the energy industry is trying to transition away from that.