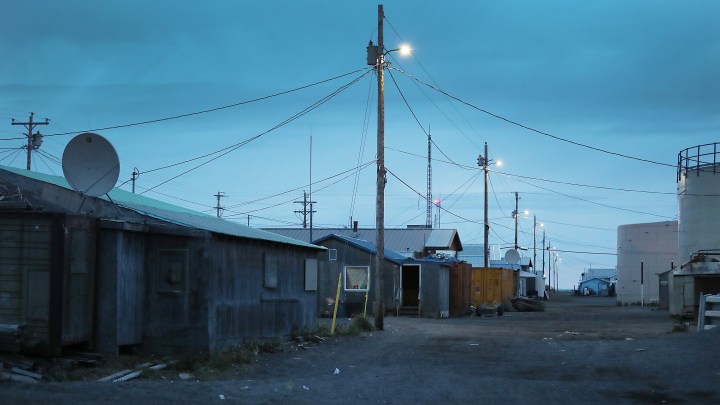 COPY
Street lights line an unpaved road in Kivalina, Alaska. Alaska is among the rural states to receive the highest per capita funding from the $1 trillion infrastructure bill. Joe Raedle via Getty Images

Street lights line an unpaved road in Kivalina, Alaska. Alaska is among the rural states to receive the highest per capita funding from the $1 trillion infrastructure bill. Joe Raedle via Getty Images
Listen Now

President Joe Biden is set to sign the $1 trillion infrastructure bill into law on Monday. It includes funding to improve America’s transportation, water and broadband infrastructure. Rural states with the most work to do on those fronts — like Alaska, Wyoming, Montana and Vermont — will receive the most funding per capita.

David Strohmaier, who serves on the Missoula County Commission on the western edge of Montana, said driving on the state’s highways can be treacherous in the winter; flying from one side of the state to the other isn’t a great option, either.

“If you want to travel around the state by air, you have to fly outside of Montana to a regional hub. You know, Salt Lake City, Denver, Minneapolis or Seattle, only then to fly back into Montana to your destination. Hardly efficient, hardly enjoyable as a traveler.”

Strohmaier’s county will put some of its federal infrastructure dollars toward repairing and improving roads. As chair of the Big Sky Passenger Rail Authority, Strohmaier also hopes the bill will eventually fund another transit option in the region: an Amtrak route through the northern Rockies.

“We are absolutely prepared to do it. We have been struggling for years and years with this need in our community that has gone unmet,” Strohmaier said. “So we are keenly aware of, on the ground, what needs to happen. We are merely lacking the funding.”

Not all of rural America’s local governments are so prepared, said Jane Kolodinski, an economist with the University of Vermont’s Center for Rural Studies.

“There are some that are really ready to go and have that human capital that have thought about how to address these things, and there are other ones that are probably not ready,” Kolodinski.

For some local governments, Kolodinski said the infrastructure bill will provide the first opportunity to carry out big infrastructure projects like broadband expansion.

“Some of these projects are going to be very successful, and probably others might flounder,” she said. “It’s up to the communities to really step up to this opportunity.”

Kolodinski lives in Burlington. She hopes her local officials will direct infrastructure funding toward improving wastewater treatment and paving dirt and gravel roads that turn into sludge come mud season.