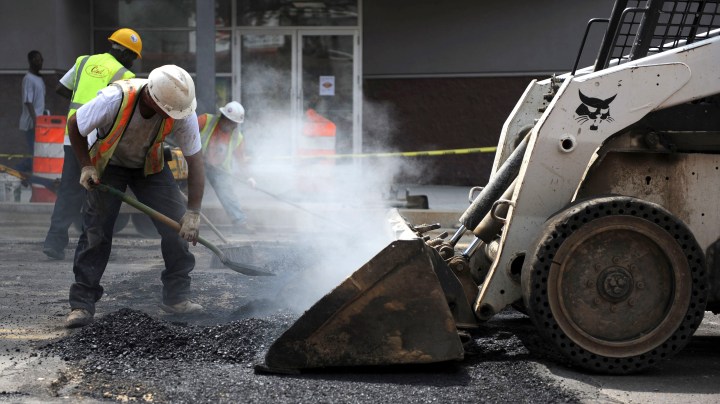 COPY
Hundreds of thousands of jobs could be created by the infrastructure bill, but filling them all may be easier said than done. Tim Sloan/AFP via Getty Images

Hundreds of thousands of jobs could be created by the infrastructure bill, but filling them all may be easier said than done. Tim Sloan/AFP via Getty Images
Listen Now

After working through the weekend, senators unveiled a nearly $1 trillion infrastructure package to fund things like road and bridge repair, broadband expansion and investments in mass transit. The fate of the bill — the Infrastructure Investment and Jobs Act — is still up in the air.

Although there’s a lot of momentum behind it, it still has to pass the Senate, then the House, then be signed by President Biden. Assuming the bill does become law, what types of jobs would it create? And how easy would they be to fill?

On a typical construction site, you need workers to actually build and repair bridges and roads. But that’s not all.

The Infrastructure Investment and Jobs Act could create around 650,000 jobs, according to an estimate by Mark Zandi, chief economist at Moody’s Analytics. Pay could average about $70,000 a year for the jobs Zandi’s referring to, some of them in manufacturing.

“Just take a look at a construction site,” Zandi said. “Those are the kinds of things — manufactured things — that will be needed for these projects. Of course, it takes all kinds of people to produce those types of manufactured goods.”

These infrastructure projects could boost the economy in rural areas where it’s difficult to find work, Zandi said.

Tony Carnevale, who heads the Georgetown University Center on Education and the Workforce, estimates the Senate infrastructure bill would create about a million jobs, with 70% of them filled by people who didn’t go to college.

“[The] people who have pretty much been left behind in the United States for 40 years now,” Carnevale said.

Even so, there aren’t enough construction workers right now. Carnevale said the U.S. will have to issue more visas for temporary foreign workers if the bill passes.

Democrats will push for money to train U.S. workers for infrastructure jobs, said Henrietta Treyz at Veda Partners. And she thinks it’ll be hard for members of Congress to vote against the Infrastructure Investment and Jobs Act.

“You have to focus on things that can get substantial bipartisan support, and infrastructure and job creation is like vanilla ice cream — everybody loves it,” Treyz said.

Senate Majority Leader Chuck Schumer says he hopes the Senate will pass the bill “in days.”