The trillion-dollar infrastructure bill cleared a big hurdle this week with Senate passage. If approved, several billion dollars would go towards electric vehicle charging stations. But who should install and maintain those stations?

In addition to charging their cars at home, future EV owners are going to want to do that on long treks too, said Carnegie Mellon professor Jeremy Michalek.

“If I go to rent a cabin up in … a rural area, I want to make sure I can charge my car there too,” he said.

Industry groups like the National Association of Convenience Stores have been lobbying Congress. They want to remain a necessity for road trips of the future, said the group’s general counsel Doug Kantor.

“You plug into a high-speed charger. You go inside to use the restroom and grab a drink … and pretty quickly you’re on your way,” he said.

“Think about USPS – the Postal Service is not profitable to deliver mail to a lot of these rural areas, but we do it because we want mail to be something you can rely on anywhere,” he said.

Michalek added that early-adopter EV drivers are understanding about the limited infrastructure now, but the mainstream public will be less tolerant. 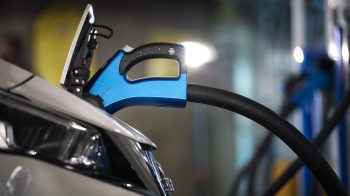