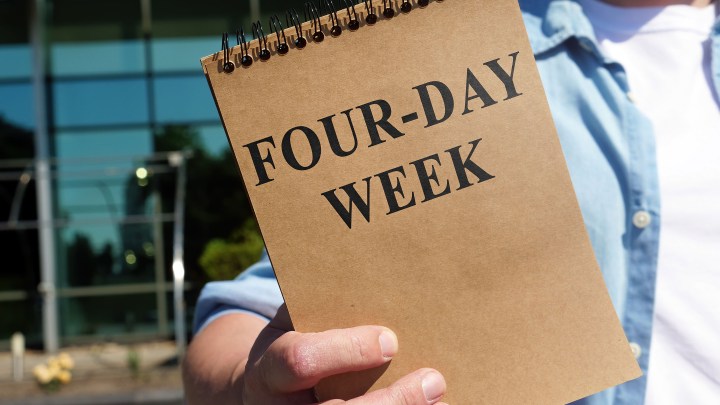 COPY
"What the research suggests is that if you thoughtfully cut back on hours during the week, you can boost employee well-being and maintain productivity," says Marketplace senior economics contributor Chris Farrell. designer491 via Getty Images

"What the research suggests is that if you thoughtfully cut back on hours during the week, you can boost employee well-being and maintain productivity," says Marketplace senior economics contributor Chris Farrell. designer491 via Getty Images
Listen Now

Largely thanks to the pandemic, employers and employees are reimagining work and reconsidering full-time office attendance as a given.

A number of countries and companies have already made bold workplace decisions. Take crowdfunding site Kickstarter, which will test a four-day workweek in 2022.

Under the right conditions, some of these tests and research have shown that a four-day workweek can work out for both employer and employee, according to Marketplace’s senior economics contributor Chris Farrell.

“What the research suggests is that if you thoughtfully cut back on hours during the week, you can boost employee well-being and maintain productivity,” Farrell told “Marketplace Morning Report” host David Brancaccio.

Below is an edited transcript of their discussion.

David Brancaccio: So you have business leaders and managers actually thinking about shortening the workweek?

Chris Farrell: Yes. And it’s not simply you’re going to work 40 hours a week, over four days, most of the thinking is about working a 30-hour week, a 32-hour a week, maybe 35-36 hours. But it is breaking this cycle of, you know, the eight-hour day, five days a week. And remember, David, that rhythm that we think is normal, right? That has been around for a long time. But it really only came about after years and years of labor market agitation, labor market pressure and it became reality for many in 1938, thanks to the New Deal’s Fair Labor Standards Act and that was passed, by the way, during an earlier economic crisis.

Brancaccio: But I have to ask, I mean, are they talking also about docking us 20% of our pay, because it’s only four days? Or, Chris, are they thinking, yeah, they’ll say four days but still give us six days worth of work so we have to do it at night?

Farrell: So the whole idea here is that you work fewer hours but you maintain your pay. And the absolute key to this relationship is that productivity stays high. And what the research suggests, and there have been a number of pilot programs, but what the research suggests is that if you thoughtfully cut back on hours during the week, you can boost employee well-being and maintain productivity.

Brancaccio: So there has been some research, pilot programs, for less than 40 hours.

Farrell: Yeah, so the one [in which] there’s a lot of interest right now is Iceland’s. Between 2015 and 2019, researchers conducted experiments involving some 2,500 workers. And they went from working 40 hours a week to a 35-36 hour week with no reduction in pay. But the trade off was successful, David, because productivity was maintained. And critical to the success of the Iceland experiment was making sure that employees were deeply involved in coming up with strategies to maintain productivity. So I mean, it sounds simple, but it was a willingness to cut back on the number of meetings and, actually, even to eliminate meetings and rely more on electronic communications. You know, there were a number of other things, but that’s just one example.

Brancaccio: All right. And there’s another experiment I remember reading about — Microsoft in Japan, what was that?

Farrell: In August 2019, 2,300 Microsoft workers in Japan got five Fridays off in a row, no cutting pay. And the company concluded that workers were 40% more productive. And they were also happier. The flaw to that particular experiment, which actually has been replicated by many other companies, is it was one month. You know, how much can you take away from one month? Nonetheless, it’s kind of intriguing, isn’t it?

Brancaccio: Well, sure. And there’s a lot of experimentation going on, not just Microsoft?

Farrell: No, and I think people are really going to pay attention to Kickstarter, moving to a 32-hour workweek next year. And Kickstarter’s CEO, he wrote in a commentary about the change, what was driving the change — and I’m paraphrasing here — but it reflects his belief that, look, if you work for Kickstarter, you should have the ability to improve the company. At the same time, we want you to have your own creative projects, spend time with your loved ones, and, you know, do activities in your community. This is an experiment that I think people are going to watch very closely.