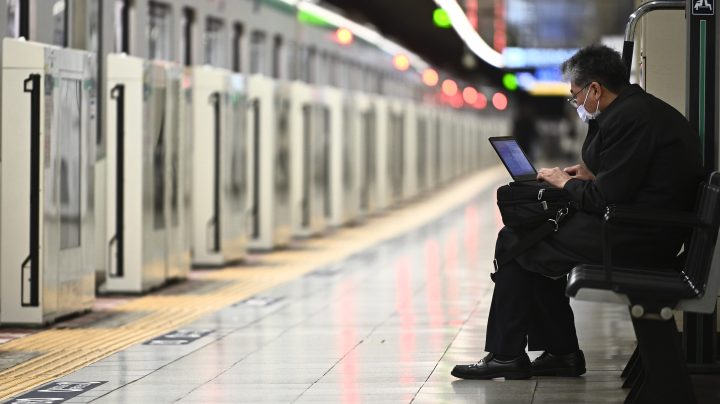 COPY
A man works on his laptop while waiting for a train in Tokyo in April. Tuning out work often can help us do our best thinking, one expert says. Philip Fong/AFP via Getty Images
COVID-19

A man works on his laptop while waiting for a train in Tokyo in April. Tuning out work often can help us do our best thinking, one expert says. Philip Fong/AFP via Getty Images
Listen Now

The idea of a four-day workweek received a boost from New Zealand Prime Minister Jacinda Ardern last week, when she encouraged companies to try it out as a way of stimulating domestic tourism over longer weekends. A shortened workweek in a post-COVID-19 world raises some interesting points.

Like pretty much all companies, the social media app Buffer has been struggling with higher than usual stress and anxiety among its employees over the last several months.

“And instead of saying, ‘No, fight against that, be as productive as you always are’ — that didn’t make sense for us,” the company moved to a four-day workweek at the beginning of May for a monthlong experiment, said Courtney Seiter, human resources head at Buffer.

“Can we meet existing deadlines that have already been set?” she said. “Can we make sure that we’re taking care of ourselves and still meeting this new bar of productivity?”

So far she said they’re meeting those goals and getting good feedback from the team.

Having down time is more important than ever these days, said David Rock, co-founder of the NeuroLeadership Institute, which consults with companies from Microsoft to Netflix on how to apply neuroscience to work. He said fears about personal health and the economy are overwhelming workers.

“And so we need some recovery time to have time to like organize the rest of our lives and have loving time with family and friends, even if it’s just online,” he said.

Paradoxically, tuning out of work often enables us to do our best thinking, he said, and a shorter workweek could help workers better unplug.

That’s what Amy Balliett found at her Seattle creative agency Killer Visual Strategies when it switched to a shorter week a few years ago. She said the extra bounce of energy her team got after a long weekend more than made up for a lazy Friday.

“So we suddenly get so much more productivity out of less days worked in the week,” she said.

Not that the shift didn’t come with some hitches. She said it took about a year to work out scheduling challenges with clients, staggering off days to make sure someone was available five days a week.

And the current situation, with so many companies forced to become more flexible and results driven, is perfect for experimenting, said Alex Pang, author of the book “Shorter: Work Better, Smarter, and Less.”

“All kinds of things that we take for granted about what normal work looks like are actually up for negotiation,” he said.

And shortened workweeks could help those who aren’t able to work remotely. Pang has studied restaurants, nursing homes, car shops and call centers that have all found ways to thrive by working fewer days.