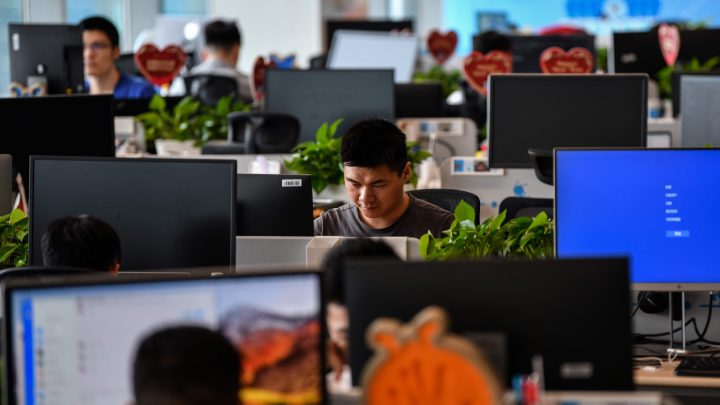 COPY
Abigail Marks, professor of the future of work at Newcastle University, worries that some employers will "try and force five days’ work into four days." Hector Retamal/AFP via Getty Images
COVID-19

Abigail Marks, professor of the future of work at Newcastle University, worries that some employers will "try and force five days’ work into four days." Hector Retamal/AFP via Getty Images
Listen Now

Burnout is top of mind for employees struggling to keep up with their work during the pandemic, and some employers are looking to move away from the status quo of a 40-hour workweek.

Some companies, including Kickstarter and Unilever, are testing a four-day workweek to combat overworking and lift morale.

Abigail Marks is a professor of the future of work at Newcastle University. She wrote a piece in the Conversation about alternative work structures to combat a culture of overworking.

The following is an edited transcript of her conversation with “Marketplace” host Amy Scott about the trials and tribulations of a four-day workweek.

Amy Scott: It clearly has staying power, but it seems like a lot of companies and governments are starting to rethink it. Why is something like a four-day week starting to catch on?

Marks: I think there is a realization that the work that people were undertaking in a factory and at the start of industrialization is very different [from] contemporary work, that there’s a lot of evidence that people are burning out. They’re overstretched, they’re overburdened. The actual intensity of work is much more than it was even 10, 15, 20 years ago, and that is having a detrimental impact on people’s well-being.

Scott: But in your piece in the Conversation, you suggest that a four-day week isn’t necessarily the panacea some might want it to be. What are the shortcomings?

Marks: I think the intention of reducing working hours is a really, really worthy one, and I think it’s right. I think the problem is, employers are clearly going to try and force five days’ work into four days, which is going to make already exhausted people even more exhausted. I think it only works with particular groups of workers, some professional workers, but Uber drivers, people working in the gig economy and people working in hospitality — it’s not going to fly. So then I think it ends up being quite divisive and sort of separates the privileged from those that are in much more vulnerable positions.

Scott: Right, and you say, you know, if people are working more intensely during a shorter number of hours, that doesn’t necessarily improve well-being.

Marks: Absolutely, and I think you really need to take a good, careful look at what we can do to reduce people’s work intensity, whether that is reducing the volume of work, changing the way that people’s productivity is defined. There’s also — if we had a universal basic income, then it makes it much easier to reduce hours to the four-day working week. But it’s not so easy, just to say three-day weekend when we’re in a 24-hour, seven-day-a-week society.

Scott: These ideas have just been highlighted by the pandemic, with so many workers feeling burned out and remaining extremely productive even while working remotely. How do you think this will change the way we think about structuring the workday as we move forward?

Marks: As you said, from the pandemic, we know home working did not decrease productivity. In fact, it increased it. But we also know it decreased people’s well-being because of work intensification due to the complications of pandemic working. What worries me is that employers are then going to believe that hybrid working is going to equal productivity, but also not think about people’s workload and what they’re actually doing, and we’re still going to have this really complex situation with increasing work intensification.

Scott: So, if knocking a day off the work schedule doesn’t work for everyone, what alternatives do you see?

Marks: I think we need to look at what people are doing, whether it is reasonable to expect people to work in the way that they’re doing, considering life is structured in a very different way to the way it was in the early industrialized era. They need to look at working hours because people aren’t working eight-hour days, they’re taking work home with them. They’re looking at emails at 10 o’clock, 11 o’clock at night, so the eight-hour working day, in some ways, becomes a myth. So we really need to look at what we can do to support employees. If they are working an eight-hour day, to have really good breaks, to ensure that there aren’t periods where they’re feeling really, really stressed, to make sure that they’re not taking work home with them.