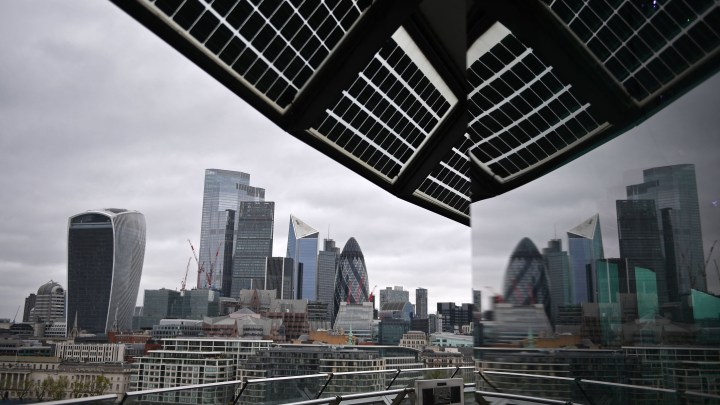 COPY
The City of London financial district. Data from the first quarter after Brexit took effect shows a small increase in the U.K.'s financial exports to the European Union. Justin Tallis/AFP via Getty Images
Brexit

The City of London financial district. Data from the first quarter after Brexit took effect shows a small increase in the U.K.'s financial exports to the European Union. Justin Tallis/AFP via Getty Images
Listen Now

There have been many dire warnings about the impact Brexit would have on the British economy, including that it would devastate the United Kingdom’s most successful export industry: financial services. The former head of the London Stock Exchange suggested that more than 230,000 jobs in that industry could disappear.

The warnings seemed to make sense.

Leaving the European Union meant that U.K.-based banks and other financial firms lost their unfettered access to the EU market, which in 2019 accounted for some 40% of overseas sales of British financial products and services.

Brexit has also meant that trading in most euro-denominated shares has been restricted to EU exchanges and, as a result, London has — for much of the past year — lost the position of top European stock-trading hub to Amsterdam.

But prophecies of doom for the City — as the London financial center is known — may have been overdone. Official figures for the first quarter of 2021, the first three months after Brexit took effect, show a small increase in U.K. financial exports to the EU, in spite of the barriers erected by Brussels.

“This confounds totally the predictions of people who were in favor of remaining in the EU,” said John Longworth, a businessman and former member of the European Parliament for the Brexit Party. “What it demonstrates is that leaving the single market has been far from a disaster. London will continue to prosper and go from strength to strength.”

That confidence appears to be shared widely in the financial district. The bosses of more than two-thirds of City firms registered their belief in a recent poll that London will retain its dominant role in spite of Brexit. That’s also the view of Barnabas Reynolds, a partner in the international law firm Shearman & Sterling.

“The City continues to be a top-tier global financial center, with the most competitive pricings and offerings of financial products and services in the world. The liquidity and the pricing here are second to none,” Reynolds said, adding that he was “not surprised at all” to see the official figures showing an increase in City exports to the EU.

But other observers are taking those figures with a pinch of salt. It’s too soon for the Brexiteers to declare victory on the basis of one quarter’s statistics, said economist and head of the CSFI think tank Andrew Hilton — especially during a pandemic.

Brussels is also in the process of mounting its most serious assault yet on the City’s role as the center of European finance. The Eurocrats now have their eyes on the Square Mile’s derivatives clearing market, a vast, $770 trillion business.

“London doesn’t just dominate this market in Europe,” said Jack Neill-Hall of TheCityUK lobby group. “London is the main global hub for clearing. For example, more dollars are cleared in London than they are in New York.”

It’s a lucrative business, and Brussels would like a slice of it — but it’s also a systemically critical business. The derivatives clearinghouses act as middlemen between the buyers and sellers of things like swaps, options and futures. Plus, they ensure that trades are settled even if one of the parties goes bust.

“The bigger your clearing industry is, the lower the costs and the better the risk is distributed across the system. It’s like insurance. The more people involved, the safer it is,” Neill-Hall said.

This explains why much of this business has gravitated to a single place like London.

Brussels, however, wants to hive off all the euro-derivatives clearing — about a quarter of the London market — and locate it within the EU. That’s bad for the City, Neill-Hall said, but even worse for the bloc.

“For European companies, it means greater costs, fewer, less-tailored and flexible products and a greater underlying risk to EU business,” he said.

Nevertheless, Brussels continues to press the banks to shift their euro clearing to the Continent. So, how safe is the City’s standing as a global financial center?

Although skeptical about the reliability of those first-quarter export statistics, economist Hilton remains reasonably optimistic about the future of London’s finance industry. He said that, so far, the City has stood up well to the EU chipping away at its business.