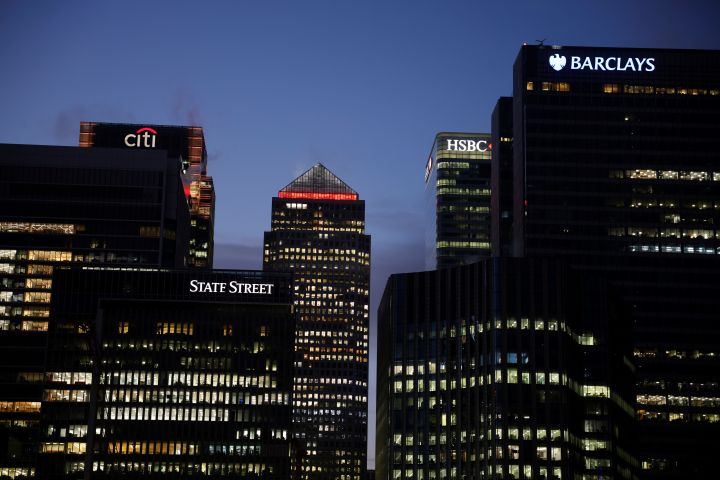 COPY
It's been six months since the end of a Brexit transition period for the U.K. How are financial companies moving forward? Tolga Akmen/AFP via Getty Images
London Unbound

It's been six months since the end of a Brexit transition period for the U.K. How are financial companies moving forward? Tolga Akmen/AFP via Getty Images
Listen Now

Britain’s divorce from the European Union was finalized nearly a year and a half ago, but it’s been just six months since the country’s transition out of the bloc was completed.

A number of 11th-hour discussions took place in December to determine how industries, such as fishing, would operate in a post-Brexit environment. But one large sector almost completely left out of those talks? Financial services.

It’s an industry that, in 2019, contributed nearly $200 billion to the U.K.’s economy, and supported nearly a million jobs. What’s more, financial services exports totaled more than $83 billion, more than three times what it imported.

And that’s the crucial reason the sector was left out of trade negotiations, according to London School of Economics professor Iain Begg.

Below is an edited version of his conversation with the BBC’s Victoria Craig on the global edition of “Marketplace Morning Report.”

Iain Begg: Boris Johnson was very keen to get to a trade deal in the sense of the old-fashioned trade in goods to avoid any tariffs [on financial services]. Tariffs don’t apply to financial services, so it’s outside that negotiation. Also, the whole point of Britain leaving the single market and leaving the [European] Customs Union was to regulate the way we wanted to, and not have to depend on getting an agreement with Brussels. The European side said, “Well, no, if if that’s the way you want to play it, then we can’t agree [on] free access to your financial services exporters.”

Victoria Craig: How concerned do you think the City of London should be — that it should have more deals in place or that it should be working on those deals? Because there doesn’t really seem to be much appetite from the EU side to agree to anything at this point.

Begg: One cynical interpretation is that for the EU, getting some of the activity that’s currently in London is seen as winning a prize. If something migrates to Paris, Frankfurt, Amsterdam or Dublin, then the EU countries in question, are going to benefit from this. So they are a no great hurry to deal with something in which the U.K. is a standout, successful exporter of financial and indeed other business services. But the City is maybe looking outside at the same time, saying, the future is the global marketplace, not so much the EU marketplace so we can tolerate losing a bit of our activity in in the EU, provided we can gain it from the rest of the world.

Craig: We have seen some of that early evidence of other cities trying to court that London business. Reports that French President Emmanuel Macron is going to seriously start courting big financial services companies to move to Paris to make that the financial capital. There’s been sort of a lot of rumblings that perhaps Paris or Frankfurt could take London’s crown. Do you see that happening?

Begg: In a word, no. Paris has been trying to steal the City of London’s crown for the best part of 200 years and has yet to succeed. And in any case, although Macron has been able to offer dinners at the Élysée Palace to putative movers from London, it’s Frankfurt, Amsterdam and Dublin, as well as Luxembourg, which tended to have been more successful in attracting the limited amount of financial services activity that’s moving from London. It’s also worth stressing that where London stands out, apart from having the English language, in this light regulatory regime, is in having a background infrastructure of other business services, which feed into financial services, notably law consultancy and accountancy, and no other European center or president can come close to matching that.

Craig: So even though London may be sort of on its back foot now that we’re into this post-Brexit era, it hasn’t necessarily lost anything. Would you categorize it that way?

Begg: Yes. So far, there’s been a trickle of jobs and certain activities, which are very clearly related to the euro, there has been some movement of asset management. But, overall, it’s it’s relatively limited. And I think that’s why the City remains quite relaxed.

Craig: Do you think there will be a point when the City gets a little bit more concerned? Would it just be if it isn’t able to make deals with other countries, like the U.S., or countries in Asia?

Begg: There’s an element of wait and see to the answer to that question, because we don’t quite know how things are moving, not just on the regulatory front, but in technology. Financial services overall is a very fast moving activity. And we see this all the time with new products being invented, new ways of doing business. The word “fintech” will crop up as a as a way of explaining how things are changing. So at this point, the City thinks it’s nimble enough to be able to cope with what gets thrown at it and isn’t that fearful.