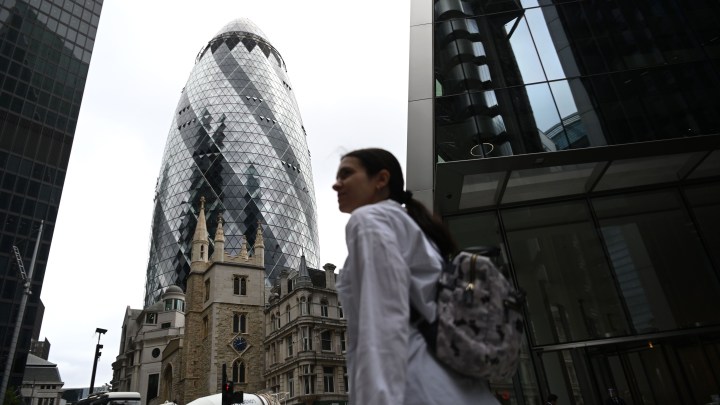 COPY
A pedestrian passes the skyscraper informally known as the Gherkin in London's financial district, which seeks to extend its international business ties. Daniel Leal-Olivas/AFP via Getty Images

A pedestrian passes the skyscraper informally known as the Gherkin in London's financial district, which seeks to extend its international business ties. Daniel Leal-Olivas/AFP via Getty Images
Listen Now

The wrangling over Brexit rumbles on, with European Union and the United Kingdom still haggling over a range of trade issues involving things like sausages and shellfish. But when it comes to one of the U.K.’s most important export industries — financial services — the wrangling seems to be over, and the result doesn’t look great for the Brits.

Services like banking, brokerage, foreign exchange, fund management, insurance and share dealing were excluded from the trade deal struck between London and Brussels just before Christmas last year. But Prime Minister Boris Johnson’s government had been hoping the U.K. would subsequently be given the same access to EU financial markets and EU-based clients as the U.S. and some other non-EU states enjoy, on the grounds that British and EU financial regulations are more or less the same.

However, those hopes have been dashed. After months of negotiation, the EU has given every indication that it will not play ball and will not allow the U.K. to participate as freely in the bloc’s finance industry as before.

That looks like quite a blow. In 2019, before Brexit, the EU accounted for 40% of British exports of financial services. The U.K. sold some $33 billion worth to the other 27 member states while buying only $6 billion worth from them, making for a British trade surplus in these services of $27 billion.

But are the Brits downcast at the possibility that some of that export business could be lost? Apparently not.

Delivering his annual keynote speech in the heart of London’s financial district, known as the City, government finance chief Rishi Sunak shrugged off the lack of an EU deal and was upbeat about the City’s prospects now that the U.K. was outside the European regulatory orbit.

“We now have the freedom to do things differently and better, and we intend to use it fully. Now we are moving forward,” he said.

Addressing an audience of finance industry leaders, Sunak pledged to press ahead with plans to streamline U.K. regulations to make London even more attractive to the rest of the world outside the EU, adding that this was a matter of national necessity.

“We need this industry to succeed. You contribute 76 billion pounds in tax each year [more than $100 billion], enough to pay for our entire police force and our entire state school system,” Sunak said. “I feel optimistic about our future, with a plan to make this country the world’s most exciting financial services hub for decades to come.”

Not everyone who works in U.K. finance is as upbeat as Sunak or as relaxed about losing unfettered access to the huge market on the nation’s doorstep.

“Unfortunately, we haven’t got a deal with the EU. It’s a failure. You can’t dress it up. This is a failure on the part of the government,” said Lucy Coutts, of wealth management firm JM Finn.

Brexiteers blame Brussels for the “failure,” for trying — as they see it — to shut the U.K. out of EU markets as a punishment for Brexit and in a bid to lure business away from London. If that was the plan, it’s working.

“More than 400 firms have relocated some staff and some assets to the EU in order to guarantee future market access and future access to EU clients,” said William Wright, managing director of the New Financial think tank. “We estimate that something like $1.2 trillion in bank assets has been transferred from the U.K. to the EU or is being transferred. That’s about 10% of the size of the U.K.’s banking system,” he said.

Wright thinks that, in the long term, as many as 35,000 jobs in the City could be affected — that is, jobs relocated or jobs created in the EU and not London — as a result of Brexit. But he is quick to point out that figure is only 10% of the number of people employed in international financial services in the City and that London’s financial center is likely to remain preeminent.

“The City has been dented, bruised, damaged, but it’s not a terminal event,” he said. “London will continue to be far and away the biggest, the dominant financial center in Europe, but perhaps as a result of Brexit, over time it won’t necessarily continue to be the dominant financial center for Europe. More European business will spread around centers like Frankfurt [Germany], Paris, Dublin and Luxembourg.”

Daniel Hodson, former head of the London International Financial Futures and Options Exchange, a Brexit supporter and chairman of advocacy group City United Project, agreed that London is in no danger of being eclipsed by a European center. It is simply too big.

“The City is a global market,“ he said. “It deals in many, many currencies, many, many products, and it has depth which goes far beyond any of the markets on the continent of Europe.”

Hodson thinks the City will go from strength to strength now that it has freed itself from the regulatory control of Brussels.

“We think it’s cleared the way for a global City to reestablish its position as one of the leading financial centers in the world alongside New York City,” he said.

In his bullish keynote speech, Sunak developed the same theme. He spoke of the City’s global opportunities, in particular the prospect of forging closer economic ties with China and its fast-growing financial services market, which, Sunak said, had assets equivalent to $55 trillion.

Lest anyone suggest that the U.K. would be prepared to turn a blind eye to Chinese human rights abuses in the scramble for cash, Sunak stated, “We can pursue with confidence an economic relationship with China in a safe, mutually beneficial way without compromising our values or security.”

Some China watchers in the U.K. are not so sure, however. Alan Mendoza, co-founder and executive director of the Henry Jackson Society — a foreign policy and security think tank — found Sunak’s remarks about China alarming.

“Frankly, I’d be terrified of going down the route of deepening, widening, broadening economic ties with China,” he said. “China can go from being a benign partner to being an overbearing bully when it wants to get its way.”

Mendoza pointed to the example of Australia, which, as a result of becoming heavily dependent on China as an export market, was hit with hefty Chinese tariffs and other sanctions against its goods for purely political reasons.

Beijing was angered when the government in Canberra called for an investigation into the origins of COVID-19 and criticized China’s crackdown in Hong Kong and its treatment of Uyghur Muslims.

“The more the U.K. invests with China or is invested in by China, the more we run the risk of falling foul of some of the political spats or strategic spats that are likely,” Mendoza said.

With many bitter political divisions between China and the Western democracies, Beijing may not prove the most congenial new partner for the City of London. The U.K.’s finance industry will certainly survive the rupture with Brussels and the loss of some Continental business, but grabbing a much bigger share of the global market may not be as easy as it seems.