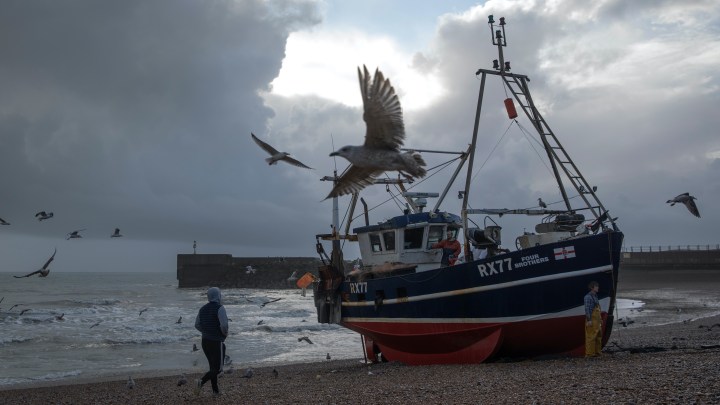 COPY
U.K. fishermen, among others, have suffered large losses because of barriers to trade with the EU. Dan Kitwood/Getty Images

U.K. fishermen, among others, have suffered large losses because of barriers to trade with the EU. Dan Kitwood/Getty Images
Listen Now

Brexit does not appear to be going so well for British exporters. Recently published figures showed that in January — when the U.K. finally left the regulatory orbit of the European Union — there was a whopping 40.7% decline in U.K. exports to the European continent compared with the same month last year. EU exports to Britain declined by 28.8%.

The British government blamed the figures on stockpiling before the end of last year and the continuing effect of the coronavirus and the lockdown. But there are fears that the sharp falls are largely due to the new trade barriers the EU has erected against its erstwhile member state and that these may permanently dent the U.K.’s most important trading relationship.

The trade agreement struck between the U.K. and the bloc last year may have ensured tariff-free commerce between the two, but since the U.K. is now outside the EU’s single market and customs union, British exports are subject to a lot more regulation and paperwork, causing delay. Exporters of live or fresh produce, like fishermen, have been among the worst affected.

“Eighty percent of the crabs we catch are sold in continental Europe, and before Brexit they would be delivered to the market within a day,“ said Alan Steer, a third-generation shell fisherman who works his boat, the Superb-Us, out of the tiny fishing village of Beesands on the South Devon coast. “Now, with all the paperwork and certification, it can take three or more days for our catch to reach its destination, which for a live crab product can be fatal.”

As a result, Steer said, the European market for his crabs fell by 50% in January, and he thinks the figures for February will show another steep fall. Since continental Europeans have a much bigger appetite for shellfish than the Brits, this big contraction in the European market is a serious blow for Steer and his fellow fishermen. It could easily put them out of business.

And it’s not just the British fishermen who are encountering new barriers to trade with the EU.

Some pig farmers are also complaining. Jack Bosworth, whose family-run firm owns 2,000 hogs, told “Channel 4 News” that his pork exports to the Continent are also facing long delays at the border.

“Our meat exports are liable to 30% checks. So every load going through is requiring such scrutiny that on fresh produce, that isn’t sustainable,” he said.

Bosworth forecast that if this continues, 15% of British pig farmers, who are heavily dependent on their Continental sales, could go out of business. He noted that U.K. meat producers are being subjected to far more onerous regulation than those of other countries exporting to the EU.

“New Zealand, for example, another third country, are only liable to 1% checks,” Bosworth said.

Brexiteers are crying foul, especially since the U.K. has not yet reciprocated with new checks and controls on EU imports into Britain. John Longworth — a former member of the European Parliament for the Brexit Party — said the EU is behaving vindictively toward the U.K., penalizing it for breaking free from the bloc.

“They are punishing us for having the temerity to want to have our own laws and our own liberty,” Longworth said, adding that the EU is punishing itself in the process. In 2019 (the last full year before the coronavirus pandemic), the bloc enjoyed a huge trade surplus with the U.K. worth over $110 billion a year.

“They have a lot to lose in comparison with us,” he said.

The EU is the U.K.’s largest overseas market — buying some 43% of British exports in 2019 — but Longworth argued this was not an existential issue for the U.K. economy. He pointed out that only 8% of British businesses sell their products or services to the EU, representing about 13% of the country’s GDP, and he said British exporters should draw comfort from the knowledge that by pursuing its own destiny — and vaccination program — the U.K. will emerge more quickly from the pandemic than the EU and that all of British business will benefit.

“The U.K. economy will grow much more rapidly than the European Union, and there will be plenty of opportunity for producers to sell,” Longworth said.

But his words seem unlikely to console disgruntled exporters.

Elles Bailey, for example. Not an exporter in the conventional sense, she’s a well-established singer-songwriter with a large European fan base. Bailey’s worried that touring continental Europe could become prohibitively expensive after Brexit, especially for young artists who are just starting out.

“The fact that British artists will now need visas and permits to perform in certain countries and they will have to make customs declarations if they take a certain amount of  merchandise with them, like CDs and T-shirts, will make the European tour a lot more costly and more difficult,” Bailey said. “And that’s heartbreaking. Europe is so, so important for up-and-coming British artists. This larger audience is what decides whether your career in music will be financially viable. It’s a crucial steppingstone to getting a visa to tour the all-important American market.”

This may seem academic while the coronavirus continues to rage across the Continent, while many European countries are in lockdown and touring is out of the question anyway. But tours take many months to organize, and that, in the current climate of uncertainty over the U.K.’s new trading relationship with the EU, is a practical impossibility.

“We don’t know what the rules or the regulations or the costs will be,“ said music manager Ross Patel. ”We’re facing a lot of uncertainty in multiple markets. Some tours won’t be feasible. The whole thing is just incredibly difficult.” But Patel agreed that a European tour is “absolutely essential” for many up-and-coming artists from the U.K.

“Streaming alone is not enough,“ he said. “You need streaming and live tours to build a listenership.”

Both Patel and Bailey stressed the importance of the music industry to the U.K. economy. In 2019, it turned over $8 billion.

The British government blames the European Union for all the new frictions facing fishermen, farmers, performers and other exporters. But the EU seems reluctant to dismantle the new barriers.

And some European politicians and officials seem to relish Britain’s discomfort. In the words of one Dutch customs officer, as he confiscated a British truck driver’s ham sandwich for breaking the new import restrictions: