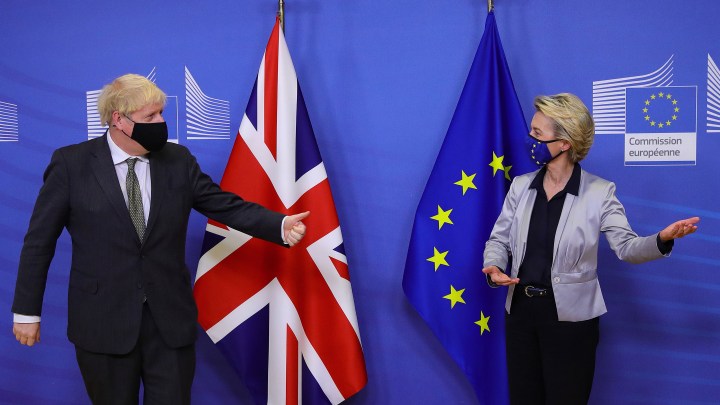 Four and a half years after the British voted for it, after two Prime Ministers fell from office because of it, and after  families, friends and colleagues fought over it, Brexit has finally, fully happened.

The U.K. left the European Union on Dec. 31, 2020, ending a turbulent 47– years long relationship between the blocs.

But against the odds, the U.K. and the EU struck a new free trade deal just before Christmas, ensuring there would be no tariffs or quotas on trade between the two.

So how does Brexit look today, in the cold light of the New Year? Marketplace checked back with three U.K. business owners about how they’re feeling now that split is final.

First, small engineering company in the English Midlands, Sarginsons. It makes lightweight, aluminum components, mostly for the auto industry. Even though it sells 25% of its output to the EU, the boss, Mark Nunan, voted for Brexit.

Nunan said he was not that concerned about whether there was going to be a trade deal with the bloc, and that “there wasn’t any stress. We really weren’t that worried. It wasn’t an issue. Corona-crisis is much more of an issue than Brexit.”

The secret to his indifference is that his company makes a highly specialized product. Nunan explained, “Basically every component is X-rayed to make sure there are no defects.”

His components are in high demand, especially, among fast growing  electric car manufacturers. So it’s up to his customers to organize all the shipping, to pick up the costs and do the paperwork.

In addition, he said that Brexit actually made  him look for more customers well beyond Europe: “We picked up a contract in San Francisco. We’ve got another contract in Beijing. The market is really buoyant so everything’s looking really good.”

Things are not as rosy for a London-based company that sells a less specialized product, and is more dependent on the EU. The boss of My Nametags was never enthusiastic about Brexit.

Lars Andersen exports more than 40% of his products, which are personalized stick-on name tags for children’s clothing and other belongings, to families across the EU.

He said there are “hundreds of thousands of individual labels being sent out everyday from this office.”

Andersen said he’s relieved about the trade deal because at least there won’t be any tariffs on his name tags. But now that the U.K. is outside the EU, his customers will have to arrange to pay sales tax themselves.

He added “It just becomes more complex, a little bit more scary for a customer.”

To get around the problem Andersen set up a subsidiary, within the EU,  in Ireland, to handle his European business. For him it has meant more hassle and more expense. This at the same time that the pandemic has closed many schools across the continent reducing demand for his name tags.

According to Andersen, “It’s kind of a sort of perfect storm: a lot of things happening at the same time and lower sales in the next few months will just add to … add to the fun!”

He tries to be philosophical about the Brexit upheaval.

Not so, Darren Price, who was also always against leaving the EU. He’s very unhappy about the U.K.’s new trading relationship with the country’s largest export market, worth around $400 billion.

Price said “We’re pretty annoyed that what we’re left with is a very thin deal which is certainly worse for business and worse for the country than remaining in the EU.”

Darren and his wife Deborah run a small company called British Boxers, selling upmarket pajamas and underwear. They depend on an intricate European supply chain which includes decorative trim from France and fabric from  Portugal and Italy.

The new deal, said Deborah, may not entail tariffs or quotas but it’s still  a far cry from the seamless trade when the U.K. was in the EU. She explained, “There’s a huge amount of paperwork that needs to be filled in. It’s taking longer, it’s more fussy, it’s taking extra time. And obviously that has a knock-on effect with extra cost as well.”

Nobody can say for sure what the knock-on effect will be on U.K. business as a whole.

Brexit supporters point to the flow of traffic at the port of Dover, the main conduit for trade with the EU, and claim the new trading relationship is a success.

But opponents say the traffic is more than 50% lighter than usual. Since the pandemic has dramatically cut the level of trade, it may be several months before the true impact of Brexit is felt.