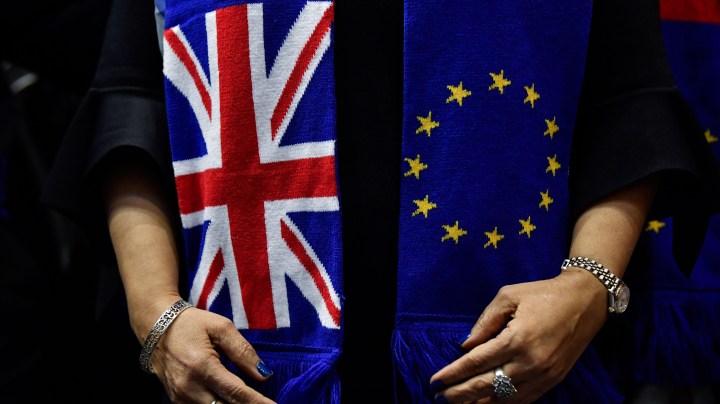 COPY
Scarves depict the British and European Union flags. Exporters in different industries have had varied experiences with the new conditions of cross-border trade. John Thys/AFP via Getty Images
Brexit

Scarves depict the British and European Union flags. Exporters in different industries have had varied experiences with the new conditions of cross-border trade. John Thys/AFP via Getty Images
Listen Now

Amid all the dramas over COVID-19, it’s been easy to miss a significant milestone for Britain: the first anniversary of Brexit. Friday marked exactly 12 months since the United Kingdom finally severed the key remaining ties with the European Union, having formally ended its membership at the beginning of 2020.

The precise economic effects of this breaking away are difficult to assess; the U.K.’s departure from the EU has, of course, coincided with the massive upheaval caused by COVID-19.

But we can at least get a sense of how some British exporters have fared during their first year outside the bloc and how they feel now about the U.K.’s momentous decision to end its close, 47-year relationship with its European neighbors.

“Marketplace” has been checking in with some of the small-business owners — both pro- and anti-Brexit — that the show has interviewed in recent years.

Steve Hardeman is managing director of Clevedon Fasteners, a small rivet-making company with annual sales of around $6 million and a staff of 32.

Hardeman was a passionate supporter of Brexit because he believes that the EU membership cramped the British economy by controlling its trade relations with the rest of the world and imposing burdensome regulations on British business.

For Hardeman, getting out would be a liberation. “I felt that Brexit would unleash the manufacturing potential of the U.K., which is absolutely vast,” he said.

But 12 months after the U.K. departed the bloc, Hardeman is a little disillusioned.

He doubts that the current British government, which he said “hasn’t got a clue when it comes to manufacturing and industry,” can make Brexit work for his company.

Officials, he said, were unable to offer useful guidance to businesses like his on the new trading relationship with the EU. And he believes the government bungled the Brexit negotiations by, for example, leaving the bloc with too much power over the British province of Northern Ireland.

“It doesn’t fill me with confidence that they are going to make as good a job of Brexit as could have been made,” Hardeman said.

So far Brexit hasn’t, in reality, had much of an impact on his business either way, while the pandemic has caused a lot more upheaval.

The opposite is true of another small company “Marketplace” has been following: British Boxers, which produces luxury nightwear and underwear.

“The pandemic, I’ll be frank, has been very good for business,“ said co-owner Darren Price. “The lockdowns across Europe pushed our sales up by 50% because people are at home and they want to wear something comfortable. But Brexit has been a big problem.”

The company depends on an intricate European supply chain that delivers decorative trim from France and fabric from the Netherlands, Portugal and Italy. Some of the manufacturing takes place in the Czech Republic, and many of the company’s customers are in continental Europe.

Brexit has meant that shipping in and out of the EU now involves a lot more paperwork and extra cost, “which makes our margin smaller and our business less profitable,” Price said.

Always opposed to Brexit, he is now more convinced than ever that leaving the EU was a big mistake.

“Far from having a positive impact on trade, as was much mooted at the time, it’s making it far more difficult for us to export,” he said. “We’ve grown a great deal over the past year, but not because of Brexit. We’ve grown despite Brexit.”

Lars Andersen, boss of the London-based firm My Nametags, feels the same about the decision to leave the EU. He exports around 40% of his products to the bloc, including personalized nametags for children’s clothing and other belongings.

Now that the U.K. is no longer a member state, Andersen faced bureaucratic hassles exporting to individual customers across the Continent. To get around that, he set up a subsidiary in Ireland, an EU member. It’s not an entirely trouble-free solution.

His life was so much easier, he said, when the U.K. was part of one huge European market. “In my personal opinion, we should go back and gently ask if we can come back in. I realize that is probably not going to happen any time soon. But one can always hope,” Andersen said.

That’s a sentiment the Brexit–supporting boss of our next company definitely does not echo.

Jules Morgan, head of KPM Marine, employs around 50 people and turns over around $8 million a year making pumps and other marine equipment. Morgan exports that equipment to more than 30 countries around the world, some of them in the EU.

These are high-value products — one shipment might be worth up to $150,000 — so, he said, the cost of the extra paperwork for his EU exports does not affect his bottom line. “It’s minuscule,” he said.

Morgan does not regret voting for Brexit.

“It wasn’t only about trade. It was also about taking back control from Brussels. It was about restoring democracy,” Morgan said. “I’m absolutely proud of what we did. We now have the freedom and the agility to make our own decisions. I’m very optimistic.”

Mark Nunan, boss of a small engineering company called Sarginsons, shares that optimism. Although he conceded that he did initially encounter “some difficulties” in exporting to and importing from the EU, these were short-lived. “Once we knew what was required, it really hasn’t been a problem,” he said. “Nothing we couldn’t handle.”

Business hasn’t been easy for him over the past two years. The company specializes in lightweight, high-tech, aluminum components for the automotive industry. With sales of around $15 million a year and a workforce of 110, Sarginsons has taken a big hit to the bottom line. Annual profits plunged by around $1.3 million in 2020 and again in 2021.

But Nunan believes the supply chain disruptions and the labor shortages that he’s suffered with — along with many other companies in the EU and around the world — have mostly been caused by the pandemic and not by Brexit.

“Corona confuses the issue in a huge way,“ he said. “But from our point of view, corona is far more of an issue than Brexit.”

A banker by training, Nunan voted to leave the EU because he believes the bloc is financially unsustainable due to the euro. Yoking together 19 of the member states in a currency union, despite their different rates of economic development, is asking for trouble, he said. In fact, he expects the bloc to break up.

Nunan still believes the U.K. is much better off out of it. “I’d vote for Brexit again,” he said.