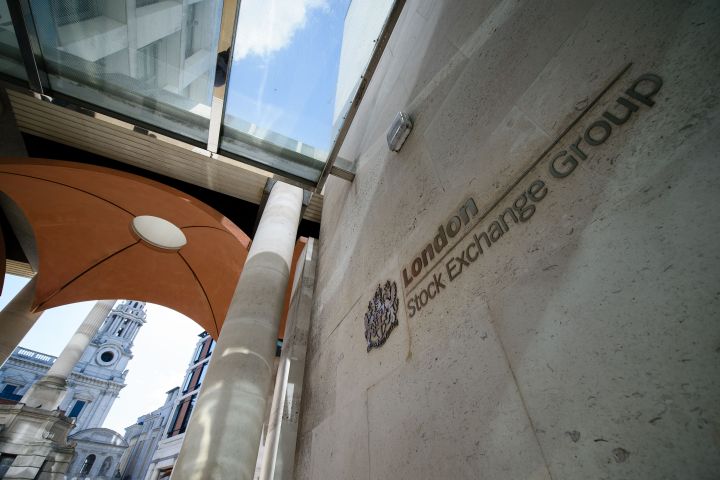 COPY
The financial services industry was largely left out of Brexit trade negotiations, but the head of securities trading at the London Stock Exchange says the industry banded together to make its own roadmap for a post-Brexit future. Leon Neal/AFP via Getty Images
London Unbound

The financial services industry was largely left out of Brexit trade negotiations, but the head of securities trading at the London Stock Exchange says the industry banded together to make its own roadmap for a post-Brexit future. Leon Neal/AFP via Getty Images
Listen Now

Partnership has been key for the financial services industry after Brexit. That’s according to Robert Barnes, head of securities trading at the London Stock Exchange and CEO of the group’s Turquoise platform, which allows investors to trade stocks across 19 European countries.

The sector, which exports tens of billions of dollars in financial services every year, was largely left out of a post-Brexit trade agreement between Britain and the European Union. The U.K.’s transition period from the bloc ended six months ago, but Barnes said there hasn’t been the volatility some may have expected. He attributes that in part to conversations between regulators, government officials and industry players to determine a clear way forward.

All hasn’t been completely smooth, though. Headlines at the start of the year proclaiming London had lost its dominant position as the European share trading hub to Amsterdam rattled some. But Barnes explains the LSE has made up for some of that loss by welcoming back trading of Swiss stocks on its platform. And, he explains why location isn’t everything in the 21st century when so much activity has been decentralized from the traditional trading floor hubs.

Below is an edited version of Barnes’ conversation with the BBC’s Victoria Craig on the global edition of “Marketplace Morning Report” from the BBC World Service.

Robert Barnes: There’s been no change to trading activity on London Stock Exchange. The framework of European regulation has been really well signposted, as a community, always working very closely with the authorities and understanding what was coming. We’ve really been working for the past three years to make sure that we’d be able to provide continuity of service. If you take a look at U.K. listings, we’ve had strong IPO activity through the first half of 2021. In fact, has been the best start to a year since 2014, even post-Brexit.

Victoria Craig: There’s been a lot of talk about the need for agreements between the U.K. and Europe to keep the ability to do seamless transactions and business across the financial services industry. We haven’t seen many of those equivalence deals. Are you saying that perhaps maybe that really isn’t necessary, because as a financial services company you can sort of do that on your own, you don’t need governments to agree it?

Barnes: Well, if you think about capital-raising and underwriting, that’s a business that can happen kind of globally, worldwide. In terms of providing continuity of service to trade the international securities, the European securities, we launched Turquoise Europe, which is regulated within continental Europe. So it’s possible, for example, to trade, not just say U.K. Rolls Royce on Turquoise, and settle in the U.K., but from the U.K. you are able to trade BMW German securities and settle them in Germany.

Craig: And that sort of highlights my next question: Early this year, the headline that caught everyone’s attention was that London lost its status as Europe’s share trading hub to Amsterdam. But, really, how big of a deal is that? Since so much is done on computers and not trading floors these days, how much does it really matter where trades are executed and settled?

Barnes: I think that’s a that’s an excellent question. Well, the reality is the matching engines of the national markets of France, Netherlands, Belgium, Portugal and others are in London. And that’s the Euronext market, a very well-respected market. And it really doesn’t matter where the machines are, because Euronext today is, and before [was], recognized as a European legal entity, Turquoise Europe is a European legal entity, but our matching engine is in the London Stock Exchange data center in London.

Craig: In February, shares of Swiss companies began trading in London after an 18-month hiatus. Do you think all of this, sort of coupled with what we’ve been talking about, do you think this is all sort of a signal that London can stand on its own two feet?

Barnes: Well, listen, I think this is a great example of how financial centers that work together, financial centers that connect, can thrive. In fact, immediately post-Brexit in January, a statutory instrument was laid in Parliament and similar regulatory and legal instruments were done in Switzerland, and by the third of February, for the fourth of February go-live, we had readmitted more than 200 Swiss symbols on Turquoise. Now the reason why that’s so amazing is that the very next day, these Swiss securities became amongst our most liquid securities active in those additional channels.

Craig: So if we look at London Stock Exchange in its post-Brexit future, where are you looking to attract more business? So companies looking to list, banks and investors looking to trade on LSE platforms.

Barnes: We clearly see an increasing interest from those countries that are growing very rapidly in regions like Asia. And London Stock Exchange, you may be aware, has a very successful partnership with the Shanghai Stock Exchange.

Barnes: Well, U.K. and Europe are very significant together as a region for capital markets, and will continue to be very significant. If you look around the world, the number of international financial centers is actually growing. If we take a look at the Z/YEN Global Financial Centres Index in 2013, there were 74 international financial centers. Today there are over 111, so this story of stock markets in the electronic age, this is really about the network effects. Financial centers that connect thrive.