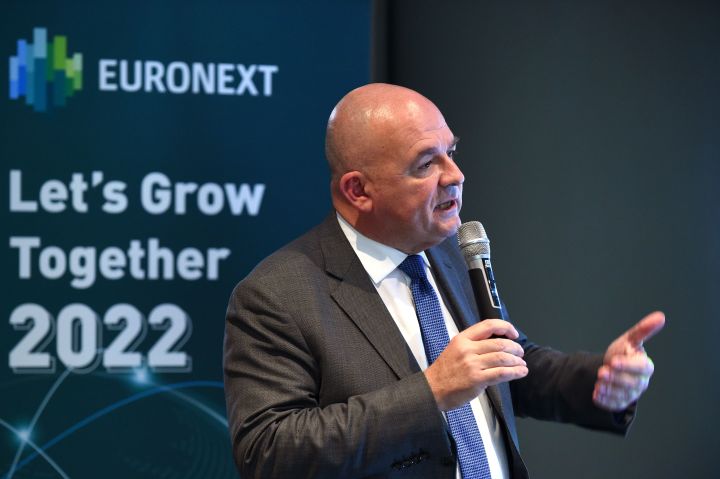 In real estate, location is everything. Apparently, so too in financial services.

In April, pan-European stock exchange operator Euronext, which functions in major cities including Amsterdam and Dublin, completed its takeover of Milan’s Borsa Italiana stock exchange in a more than $5 billion deal. At the same time, it announced plans to shift its data center in the second quarter of 2022 from Britain’s eastern coast to the northern Italian city of Bergamo.

The company markets itself as being “at the heart of European markets,” so, as its boss Stéphane Boujnah explains, it made sense to focus there after the United Kingdom divorced itself from the European Union.

Below is an edited version of his conversation with the BBC’s Victoria Craig on the global edition of “Marketplace Morning Report.”

Victoria Craig: Did you have to move those systems and that equipment out of the U.K. just because it’s no longer in the EU? What was behind that decision?

Boujnah: We want to have a critical part of our infrastructure within a predictable regulatory environment. And we have no visibility as to what will be the future of regulations applying to circulation of data between the European Union and a third country like what the U.K. has become post-Brexit.

Craig: The equipment is in the EU now, but as of now, 80% of the trades originate here in the U.K. still. So do you think, as a result of the move that you’ve already made, more customers — that’s the banks that execute those trades — that they’ll decide maybe to move to Italy or to other parts of the EU as well?

Boujnah: Well the trend has started, as you know, since the beginning of the year, a significant amount of equity trades have migrated to the European Union. And anyone, post-Brexit, who wants to make business on European stocks, to serve European-based companies, has to establish operations within the EU. The world post-Brexit is fundamentally different from the world pre-Brexit. The world where we have the finance in Manhattan, the automotive in Detroit, the oil and gas in Houston, Palo Alto [taking] technology and the movie industry in Los Angeles is fine. But if, at some point in time, Wall Street says, “We don’t recognize anymore the Supreme Court and Congress,” then there is an issue, and the system changes. And that’s what Brexit is all about. It’s a decision to change the political environment and the regulatory environment of finance in Europe. Therefore, the European Union bloc had to get organized to adjust to this new reality.

Craig: Is there anything that really the city or the country could do? You mentioned regulation a few times that could change your mind to come back to London.

Craig: Now, a few U.K.-based companies that are already listed in London have been launching secondary listings in Europe. Are you seeing that becoming a trend?

Boujnah: We have seen that trend in Dublin and other locations within the Euronext group. I think it’s there to continue. We will have the largest aggregate market capitalizations for companies listed on the Euronext market, so over 5 trillion euro, which is a multiple of what is listed in Frankfurt, and probably one-third above what is listed in in London. So it’s not a surprise that some companies want to get organized to have access to that European liquidity pool.