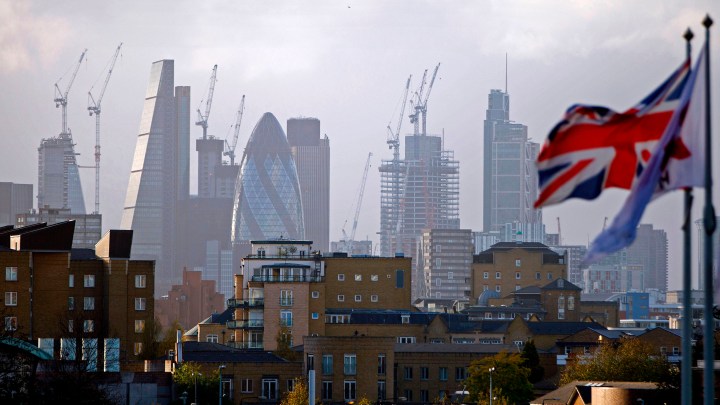 Four months after losing its status as Europe’s stock trading hub to Amsterdam, London has taken back control.

The city topped a list of 15 countries on Friday, showing the average daily value traded in the city reached $10.55 billion. The data was compiled by the Chicago Board Options Exchange. Still, that’s only a whisper away from the $10.41 billion traded in Amsterdam, and far below the $16.9 billion London racked up in December 2020 before the Brexit transition period ended.

But, it’s likely to give more momentum to Chancellor Rishi Sunak, who this week outlined a path forward for the U.K. financial services industry in this new era outside the EU.

While the U.K. has tried to maintain close regulatory ties to Europe, Sunak said the focus is now turning to deepening connections with the United States, its biggest partner in financial services trade, while also looking to large emerging economies including China, India and Brazil. Other areas of focus include an effort to spur more innovation in the financial technology sector, and becoming a leader in green finance.

Nicola Watkinson, managing director of international trade and investment at TheCityUK, which represents Britain’s financial services industry, told the BBC’s Victoria Craig what she envisions a successful post-Brexit strategy to be. Below is an edited version of their conversation on the global edition of “Marketplace Morning Report.”

Nicola Watkinson: The reality is that the U.K. recognizes that 95% [or so] of global economic growth going forward is going to be outside of the EU. Markets like the U.S. and growing markets across Asia represent an extraordinarily important opportunity for the U.K. to grow its global position. The U.S., of course, is extraordinarily important to the U.K., whether that be around areas such as technology and innovation, but increasingly around areas like green finance as well, particularly under the Biden administration, as we really see a strong push toward net zero.

Victoria Craig: Does it look like those are things the U.K. is already focusing on with Asia and the U.S.?

Watkinson: Absolutely. Whether it be with India or with Japan and Singapore, with Canada, with the U.S. and other markets. If the U.K. and the U.S. join forces, because we have the two largest global financial centers in the world, if we work together for global standards, whether it be around green finance or around technology, we can actually pull in many other markets behind us.

Craig: And how quickly do you think some of these new partnerships could come to fruition?

Watkinson: I think some of this can happen quite quickly in the lead-up to big events like the COP26, [the 2021 United Nations Climate Change Conference] in November, you can see the U.S. and the U.K. really pushing forward with a shared agenda around a lot of these areas. In terms of other free trade agreements, you’ve seen a huge impetus behind the U.K. efforts to forge new trade agreements with the U.S. neighbors of Canada and Mexico, but it’s also obviously talking to Australia to New Zealand, and to a range of other markets. And really pushing forward on exciting new areas of free trade agreements, such as digital provisions, which are increasingly important, especially when you think that the U.K. economy is about 80% services.

Craig: So could these partnerships with North America, with Asia make up for losses that the U.K. could see without permanent equivalence with Europe?

Watkinson: I think it’s not necessarily an either-or, but future growth for the U.K. will focus a lot into the Indo-Pacific area, as well as with the U.S., Japan, Singapore and other like-minded countries. But the U.K. will also work very hard to preserve and build its relationships with the EU and seek to continue to partner together wherever that can be possible.