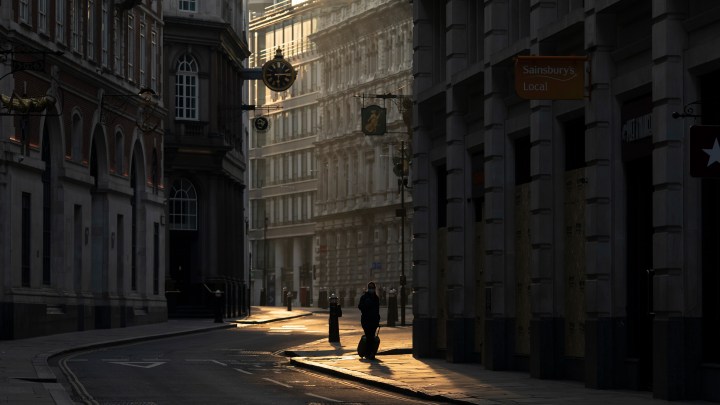 COPY
An early-morning view of London's financial district, known as the City. The district has lost jobs since the Brexit vote, and European financial centers are eager to profit from regulatory changes. Dan Kitwood/Getty Images

An early-morning view of London's financial district, known as the City. The district has lost jobs since the Brexit vote, and European financial centers are eager to profit from regulatory changes. Dan Kitwood/Getty Images
Listen Now

London’s financial center — the City, as it’s known — is the most successful industry in Britain.

Financial services and related professions like law, accounting and auditing employ around three-quarters of a million people in the British capital and more than 2 million across the country.

But is this economic dynamo in danger of running down, thanks to Brexit? Have the job losses begun?

“That’s 10,000 fewer jobs in London than there were. And 10,000 more jobs elsewhere in the European Union,” said Sir Mark Boleat, a leading figure in the City and a fierce opponent of Brexit.

“There’s been one forecast that eventually 75,000 jobs could be lost, and I think that doesn’t look unrealistic,” Boleat gloomily observed.

The problem stems from the loss of so-called passporting rights. When the U.K. left the European Union, the City gave up the automatic right to sell its services freely throughout the remaining 27 member states. Financial services were not included in the free trade deal the U.K. struck with Brussels, and while talks are now underway to seal a separate pact on finance, which the Brits hope will acknowledge that there is regulatory equivalence between the U.K. and the bloc, the omens are not good.

Brussels has already decreed that all official trading in EU-listed equities must take place only on EU-regulated exchanges. And that has already persuaded some major banks and other finance companies with large operations in London that they will need to beef up their presence in centers like Frankfurt, Germany; Paris, Amsterdam and Dublin, at the expense of the British capital.

Since Britain has the same financial regulations as the EU, the restrictions on European equity trading have been interpreted by some as a commercially motivated move to squeeze the U.K. out of lucrative markets.

“The Europeans want some of this business that London has. London is the major international financial center, and the Europeans want a slice of it,” said Andrew Hilton, head of the CSFI think tank. He added that some EU member states have bent over backward to lure bankers and brokers and other finance workers away from London.

France has mounted a particularly aggressive recruitment drive. President Emmanuel Macron’s government has offered London-based financial firms a wide range of inducements to relocate, including streamlining France’s notoriously burdensome bureaucracy. The move has begun to pay off. Big American companies like Goldman Sachs, Bank of America and JPMorgan Chase have between them shifted several thousand jobs from London to the French capital. French policymakers have been quoted gloating that they are “going to feed off the carcass of the City.”

So what has the U.K. government been doing to protect London’s financial center against European predators? Not much, its critics say.

“The government has not prioritized financial services in the way you would have expected,” said Sir Simon Fraser, former head of the U.K. Foreign Office and now managing partner of the Flint Global consulting firm.

“The voice of the City — and indeed the voice of the services sector, which is so critical to the British economy — does not appear to have been listened to,” Fraser said.

Since the EU accounts for a third of the City’s exports, and since many foreign banks based themselves in London as a gateway or steppingstone into the bloc, the British government’s apparent indifference may seem bizarre. One reason for it, Fraser ventured, may have been the unpopularity of the financial services sector following the 2008 crisis. But he insisted that the government should devote itself vigorously to the  “equivalence” talks with the U.K.’s erstwhile EU partners.

“If there is a long-term uncertainty about the regulatory equivalence arrangements, then there could be a danger of London losing more revenue to EU rivals,” Fraser said.

Brexiteers shrug off the threat. Daniel Hodson, former head of the London International Financial Futures and Options Exchange, is not in the least bit alarmed by the Continental scramble for the City’s share of international business.

“Yes, you’ve got good financial centers, like Frankfurt, like Paris, like Milan. But they are not, and never will be, certainly not in a generation, the size of the City of London,” Hodson said.

The City is literally too big, too liquid, to fail, he said. The EU needs London’s vast pools of capital. Hodson stated that while trading in EU-listed equities has been officially confined to the EU, there is evidence of unofficial dealing continuing in London.

“The dealers are finding workarounds so they can trade off-market in London, where they know they can get better prices,” he said.

History could repeat itself. In the 1960s, higher taxes and tighter regulation in the United States persuaded many corporations and individuals to keep their overseas dollar earnings outside the U.S. That created the so-called eurodollar market, which helped fuel the rise of London as a global financial center.

“The same thing will happen with transactions in euros if the EU tries to barricade them within the EU,” Hodson said. “And London, which is open, welcoming and fast on its feet, will benefit.”

The next few months should reveal whether that confidence is justified and whether the City can thrive after Brexit.