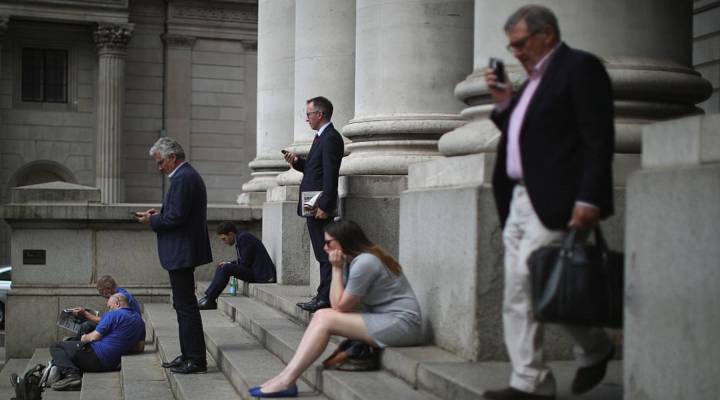 COPY
City workers talk on their mobile phones near the Bank of England as the financial markets face uncertainty in the wake of Brexit on June 27, 2016 in London, England.  Christopher Furlong/Getty Images
Brexit

City workers talk on their mobile phones near the Bank of England as the financial markets face uncertainty in the wake of Brexit on June 27, 2016 in London, England.  Christopher Furlong/Getty Images
Listen Now

The U.K.’s voting in Thursday’s referendum on EU membership revealed deep fault lines between Scotland, which voted to remain in the EU, and England, which voted to leave; between young and old; and between the country as a whole and its capital city.

London – host to one of the world’s top financial centers — voted two to one in favor of EU membership and many Londoners are now unhappy and apprehensive about Brexit.

“This result is bad for immigrants and therefore bad for London,” said Patricia Ferguson at a pro-EU rally in Trafalgar Square. “Look around you. Look at our city. What makes London special and dynamic and a living city is its welcome to people from everywhere in the world. Taking us out of the EU can only be bad for our city,” she said.

Sharla Kew, another young Londoner at the rally, said the shock result made her feel more of a Londoner and a European than a British citizen.

Many thousands of Brits seem to feel the same.

An internet petition calling for London to declare its independence from the U.K. and then to rejoin the EU, attracted more than 175,000 signatures. The author of the petition James O’Malley intended it as a joke but claimed that it was not such a crazy idea.

“There are flourishing city states. Look at Singapore. Look at Hong Kong. London is this wealthy, cosmopolitan city where loads of new stuff happens,” he said.

London isn’t going to separate from the U.K. But many Londoners — like many Scots — feel they’re being taken out of the EU against their will and they’re demanding that they, at least, play a part in deciding the terms of the divorce. There is a great deal at stake for both the city and the country. London and its businesses, including financial services, account for 25 percent of the British economy and 30 percent of U.K. tax revenues.

“It’s too early to say how much jeopardy the financial center is in, but there’s an awful lot of worried faces around,” said Colin Stanbridge, head of the London Chamber of Commerce.

Stanbridge said everything now depends on the sort of exit deal the U.K. can negotiate with its European partners. “London must keep its unfettered access to the EU single market and do nothing to deter talented Europeans from coming to work in the capital. Otherwise, London could lose much financial business to continental rival hubs like Paris or Frankfurt,” he said.

London’s reach into the rest of the EU and its talent pool, however, could both shrink if the divorce gets messy and the U.K. fails to extract a favorable deal from its European partners.