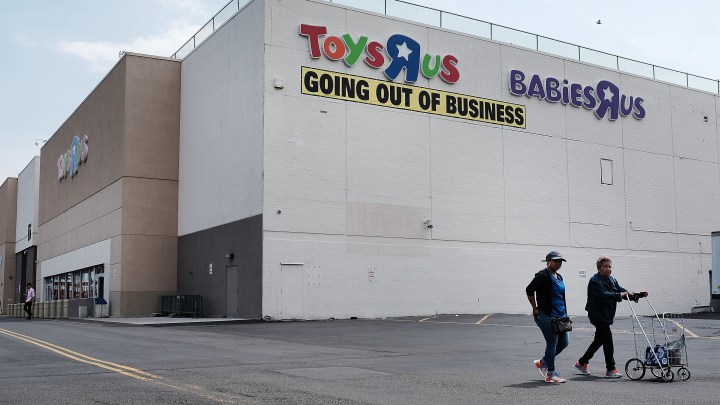 COPY
A Toys R Us store in New York in 2018, after the chain said its U.S. locations would close. Macy's plans to use the brand name to boost traffic in its department stores. Spencer Platt via Getty Images

A Toys R Us store in New York in 2018, after the chain said its U.S. locations would close. Macy's plans to use the brand name to boost traffic in its department stores. Spencer Platt via Getty Images
Listen Now

Macy’s just announced that it will open Toys R Us shops inside more than 400 of its stores next year.

It’s a weird one to explain. Just a few years ago, Toys R Us filed for bankruptcy with $5 billion of debt on its books before shutting down its U.S. business entirely. It laid off more than 30,000 people and sold all of its inventory.

But even when a business seems to be dead, somebody can put the electrodes to its chest and jolt it back to life.

In 2018, there was a bankruptcy auction for the leftover intellectual property from the iconic toy store. “That would be the names Toys R Us, Babies R Us, Geoffrey the Giraffe,” said James Zahn, senior editor of the Toy Insider.

“And the parties involved at the time” — some of the lenders that Toys R Us owed money to — “decided to cancel the auction and keep the IP for themselves,” Zahn said.

They tried to monetize it. The lenders opened pop-up shops at Kroger under the name Geoffrey’s Toy Box. They partnered with Target to have the Toys R Us website send customers to Target.com. They even opened a couple of experiential stores, then shut them down in the pandemic.

Now here we are, with the Macy’s partnership.

The lenders aren’t calling the shots anymore. Toys R Us is now controlled by a brand-management company called WHP Global, and it’s not actually a retailer anymore.

“That’s why this partnership with Macy’s is so important,” explained Steph Wissink, a managing director and senior research analyst at Jefferies.

What Macy’s wants is more customers, and it’s betting that the Toys R Us name will bring them into its stores.