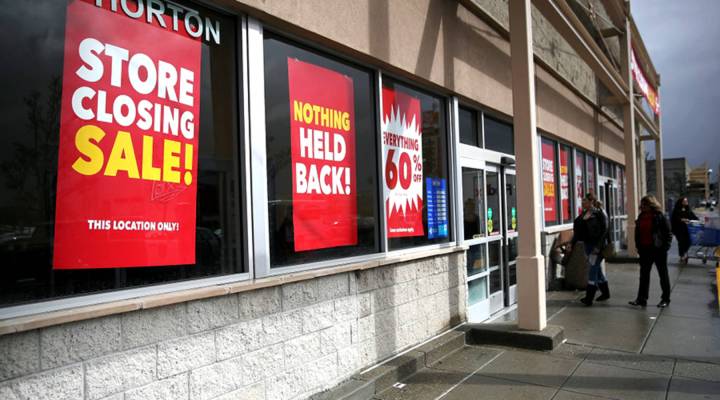 COPY
Toys R Us filed for liquidation in a U.S. Bankruptcy court and plans to close 735 stores, leaving 33,000 workers out of jobs. Above, a Toys R Us store in Emeryville, California. Justin Sullivan/Getty Images

Toys R Us filed for liquidation in a U.S. Bankruptcy court and plans to close 735 stores, leaving 33,000 workers out of jobs. Above, a Toys R Us store in Emeryville, California. Justin Sullivan/Getty Images
Listen Now

In September 2017, drowning in more than $5 billion of debt, Toys R Us filed for Chapter 11 bankruptcy.

The first thing you need to know?

“Chapter 11 does not mean a company’s dead,” said Pamela Foohey, an associate professor at Indiana University’s Maurer School of Law.

Rather, Chapter 11 is a lever a company can pull when it’s in too much debt. The filing temporarily protects the company from everybody it owes money to while it gets its finances in order. Then the company comes up with a plan, including “what the business will look like going forward, who’s going to get paid, and what amount of their claims will be paid,” Foohey said.

But pulling that lever can creates uncertainty for everyone that does business with a company. For a retailer, that starts with suppliers. At Toys R Us, that’s hundreds of toy makers.

Last September, Toys R Us was getting ready for the holidays, stocking up on toys it hadn’t paid for yet. Then it filed for Chapter 11. And when that happens, “all of the money that they owe you gets sort of frozen, and it becomes an issue for the court to figure out how much they’re going to pay out,” said the CEO of one toymaker, who asked to remain anonymous because he was still doing business with Toys R Us.

When the retailer filed for Chapter 11, it owed his company $4 million for toys it had already delivered, he said.

“We’re a relatively small company, and, you know, to have $4 million of cash just suddenly disappear in thin air, it was a scary proposition,” he said. His company negotiated with Toys R Us but ended up taking a loss.

Another part of a business left in limbo during Chapter 11: workers. Toys R Us had 36,000 around the country.

Leshonda Walker, who’s 41 and a sales associate at a Toys R Us store in Emeryville, California, heard the news secondhand.

“My kids started calling me, ‘Mom, didn’t you say you just started working at Toys R Us? There’s something online saying they’re going into bankruptcy.’ I was like, ‘What are you talking about?’” Walker said.

At work, Walker’s manager reassured her that the company was fighting to stay open. Then, in January, more bad news. Toys R Us was closing a fifth of its stores, including hers.

She started looking for another job.

“I still gotta take care of my children,” Walker said. “I have little ones that need stuff.”

While all this was going on, Toys R Us was coming up with that plan to reorganize the business. But in a Chapter 11 bankruptcy, the banks have to agree to those terms. If they don’t, a retailer may have to shut down entirely, liquidating its stores to pay its debts.

That’s what’s happening at Toys R Us now. Earlier this month, the retailer told workers it’s closing the rest of its stores. Everyone who’s owed money will have to get in line.