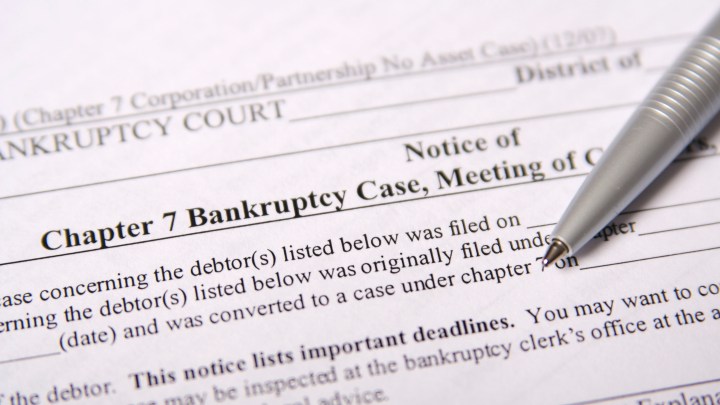 COPY
Bankruptcy can be a lifeline for some, but it's still out of reach for many who can’t afford the roughly $1,500 it takes to hire an attorney and pay for court fees. FuzzMartin via Getty Images

Bankruptcy can be a lifeline for some, but it's still out of reach for many who can’t afford the roughly $1,500 it takes to hire an attorney and pay for court fees. FuzzMartin via Getty Images
Listen Now

A complicated and unplanned pregnancy is what pushed Carlazjion Constant of Smyrna, Tennessee, to the brink, financially.

Her pregnancy was high risk, and Constant said her high-deductible health insurance didn’t help much with the additional doctor visits. Just as those bills totaling $5,000 came due earlier this year, a real estate company started garnishing her wages over a broken lease from a decade ago, when she was in college.

“I have a child. Like, I can’t do that,” Constant said. “I have to do something, something has to be done. There has to be a way out.”

So she started looking into Chapter 7 bankruptcy, which is usually for those without many assets to protect. Unlike Chapter 13, it essentially cancels most debts, though usually not student loans.

Constant called bankruptcy lawyers and learned they would charge her at least $1,500. “To get out of debt, I’m going back into debt. It was just wild to me,” she said.

Medical debt often pushes families into personal bankruptcy. Nearly 20% of U.S. households are on the hook for old medical bills, according to the U.S. Census, with higher concentrations in the South.

It’s a last resort, but this financial reset button is also out of reach for many because the act of declaring bankruptcy is relatively expensive.

A Brooklyn-based nonprofit, Upsolve, is trying to help cut those costs. Constant’s web search for a cheaper resolution led her to the Upsolve website, where users can download an app that helps them file for no charge and without hiring an attorney.

“Those legal fees are like modern-day poll taxes,” said Upsolve co-founder and CEO Rohan Pavuluri. “I mean, if you can’t pay the fee, you can’t access this right you’re supposed to be guaranteed.”

By answering questions in plain English through the app, the data populates nearly two dozen forms required to file bankruptcy with federal courts.

To offer the service for free, the nonprofit gets some government support, along with money from charitable foundations and some big-name Silicon Valley investors and executives.

Users still owe the $335 court filing fee, though the app also helps users apply to have the fee waived. Since its founding in 2018, Upsolve says it has helped people file bankruptcy to find relief from more than $435 million in debt.

More than just simplifying the process, Pavuluri said he’s on a mission to destigmatize bankruptcy. He said bankruptcy is seen as a personal moral failing even though it is used strategically in the corporate world to get a fresh start.

“We want to empower everyday Americans to get the same tools that the richest people and the richest corporations in America have,” he said.

But bankruptcy isn’t right for everyone, said Erin Akery, who provides free financial counseling with the United Way in Nashville. “That may not be so great for people who are looking for a quick, easy solution, and it’s not the right path for them.”

Chapter 7 bankruptcy devastates credit for years, making it difficult to get a loan for a car or a lease for an apartment. It’s also a lifeline that can only be used once every eight years — so if debt continues to accrue, it won’t be an option again for a while.

And the cost, while sometimes prohibitive, can also help some people better consider the trade-offs. “I think if people don’t have to go through that cost-benefit analysis, then a lot more people might file bankruptcy who really shouldn’t,” Akery said.