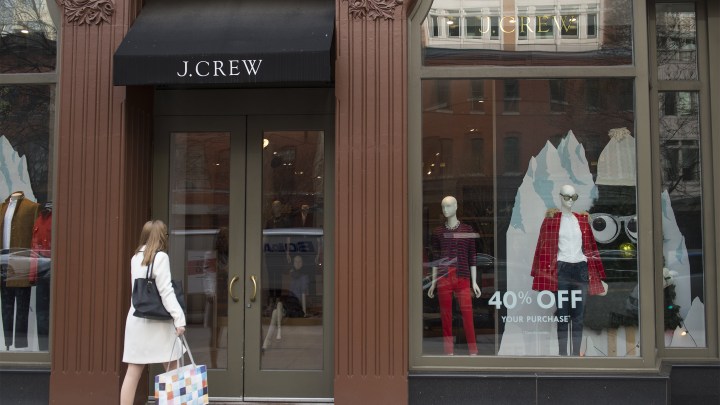 COPY
A J.Crew in Washington, D.C. The company is expected to file for bankruptcy this weekend. Saul Loeb/AFP via Getty Images

A J.Crew in Washington, D.C. The company is expected to file for bankruptcy this weekend. Saul Loeb/AFP via Getty Images
Listen Now

For years now, we’ve seen one retail bankruptcy after another: Sears, Forever 21, Toys R Us. And analysts have compiled a sort of bankruptcy watch list, too.

J.Crew is on it. It has a lot of a debt. Its sales have been falling. And it was starting to turn things around, with a planned spinoff of its brand Madewell, but that fell through in March. And now?

“We’re facing a year of pretty severe disruption and a 2021 of most likely only partial recovery in consumer spending,” said Raya Sokolyanska, a senior analyst at Moody’s.

J. Crew is expected to file for bankruptcy this weekend, according to multiple news reports.

Neiman Marcus, which recently missed some of its debt payments, is also reportedly on the verge of a bankruptcy.

Even if these companies might have filed for bankruptcy eventually, things will be much worse — for everyone — if they’re all forced into it at the same time.

“It does not necessarily mean they go out of business,” said Craig Rowley, senior client partner at Korn Ferry consulting.

“Companies choose to go bankrupt sometimes because it allows them to wipe out the debt or renegotiate the debt and close stores that are not profitable,” he said.

But these companies need banks to lend them money so they can fund their operations during the bankruptcy process.

It will be harder for companies to get financing right now, “and it’ll most likely be more expensive,” Rowley said. “And the reason for that is just the uncertainty of the current environment.”

Also, when retailers file for bankruptcy, they close stores and hold liquidation sales to drum up some cash.

“But at this time when people cannot get out of home, brick-and-mortar shopping is down, that inventory is going to sit in those stores, I cannot convert it into cash,” said Vishal Gaur, a professor of manufacturing management at Cornell.

So retailers that are pushed into a bankruptcy filing at this moment are more likely to go out of business entirely.

We know what that means for the economy: more people out of a job and more clothing and shoe suppliers with nowhere to sell their products.